A third Sonoma victory will have to wait for Pro Stock champ Jeg Coughlin Jr. 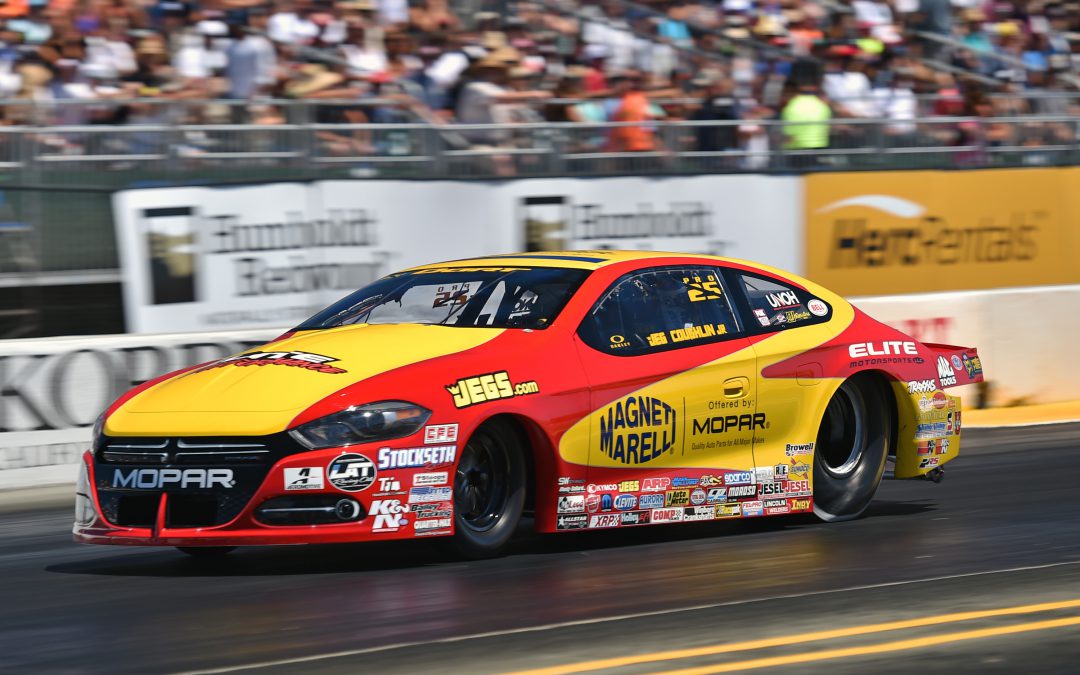 SONOMA, Calif. (July 31) — Drag races at the professional level are routinely decided by fractions of a second, and depending which side of the equation you're on, that can be a good or bad thing. For five-time Pro Stock world champion Jeg Coughlin Jr., it seems like ages since the racing gods have smiled on him and his Magneti Marelli offered by Mopar/JEGS.com Dodge Dart.

Such was the case early Sunday afternoon when Coughlin's opening-round pass of 6.603 seconds at 209.39 mph left him just a fraction behind Chris McGaha's 6.593 at 209.88 mph. A pesky one-hundredth of a second difference in elapsed times.

"We kinda of fumbled our way through this race," Coughlin admitted. "I mentioned earlier in the weekend that we came out of Denver with some high hopes after seeing renewed performance that we could count on up there on the mountain but when we got out here we just stumbled for whatever reason.

"We ended up hurting a couple of motors Friday, which is never a good sign. So we ran a back-up motor in Q3 and Q4 yesterday and it ran ok. We just weren’t getting the car going like it was in Denver. Today it got a little bit better, and I did run a 6.60 in the first frame, but we seemed to be a day late and dollar short, quite honestly.

"There’s still some performance to pull out of these HEMIs, we just weren’t able to squeeze it out there in that round. A little bit more performance would have helped us keep it out in front of Chris."

Coughlin says the team has a lot of things they want to get done before the 29th annual ProtectTheHarvest.com Northwest NHRA Nationals begins Friday, Aug. 5, at Pacific Raceways near Seattle.

"We’ve driven a bunch of motors back to (our shop in) Oklahoma already," Coughlin said. "They should get back in town tonight and Jake (Hairston) and Nick (Ferri, engine builders) will fly back tonight and the guys will already have them apart in the shop so they can get to work probably first thing in the morning.

"My teammate Erica Enders and team owner Richard Freeman are going to drive two other motors back today, pulling an all-nighter to get back. There is no quit o=in this group at all.

"This new chapter with Dodge has been a work in progress really from day one back in Oct when we started this project and we haven’t capitalized or found that big break yet, but things could be much, much worse. I’m not complaining about a thing but certainly looking for better things to come in the near future."