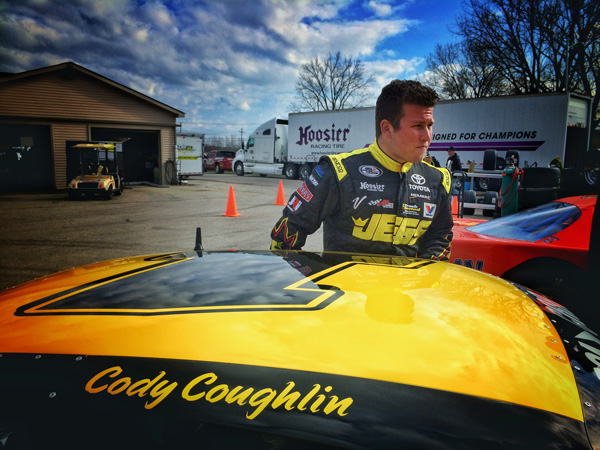 For much of the early stages of Saturday's ARCA/CRA Super Series season-opening event at Ohio's Toledo Speedway, the stout field of drivers were all following the leader of the pack; Cody Coughlin.  Coughlin started on the pole position in the 7-Up 100 and powered his way into a comfortable lead in the opening laps in his JEGS number-one Toyota.  And he did it all with a scratched cornea that he suffered in his left eye prior to the green flag.

Despite the irritation, the 19-year-old Joe Gibbs Racing development driver was the Pied Piper of the field for nearly 30 laps.  As the circuits clicked off in the caution-free event, Coughlin eventually was passed for the top spot.  Just as spotter Scott Wimmer suggested over the team radio, Coughlin rode in the leader's tire tracks just waiting for his opportunity to pounce.

As the race fell into its 100-lap green flag run, Coughlin's machine turned to the loose side.  Coughlin battled hard for position in the top five as he weaved in and out of lapped traffic.  Still, the driver kept fighting, knowing that there would still be an opportunity to race for the win if a caution flag flew in the race's later stages.

That caution never came, however, and Coughlin's car continued to give him fits.  He battled through the loose condition and crossed beneath the checkered flag with an eighth-place finish despite his vision being compromised during the race.

Coughlin was treated after the race and was diagnosed as having a scratched cornea.  Doctors prescribed some medication and told him within the next four days he should be “good as new.”

While the result wasn't indicative of the speed shown by the team, Coughlin, his crew chief Nick Easton, team manager Kevin Hamlin and the rest of his team knew that they had a solid building block to work from as they chase Super Late Model victories later in the season.

"It was a good day for us, even though we didn't finish where I think we were capable of finishing," said Coughlin, who raced in Toledo with the support of his dad (John), mom (Di) and sister (Kennedi), and many friends as well.  "It wasn't the finish that we wanted, but we had a lot of speed throughout the weekend and in the early part of the race.  We nailed the setup in practice (Coughlin topped the speed charts in Friday's final practice session) and in qualifying, but the car just took a turn on us in the race.  Still, it's something to build off of and I know my Team JEGS guys will work even harder than they already do to get us another stout car next time we run.  I just have to thank God for keeping us all safe and giving us a great day to race in my home state of Ohio.”

Coughlin will now shift his focus back to his ARCA Racing Series efforts with Venturini Motorsports.  The Joe Gibbs Racing Development Driver will be back behind the wheel of the JEGS number-55 Toyota in the ARCA event at Talladega Superspeedway (AL) on Friday, May 1.