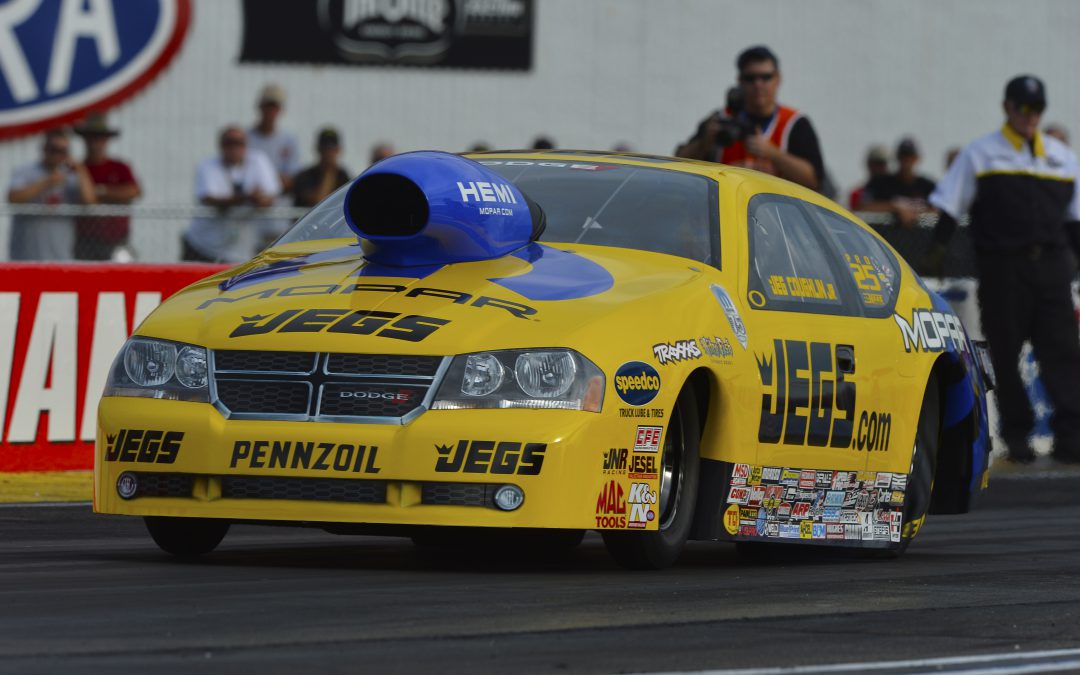 ST. LOUIS (Sept. 29) – Jeg Coughlin Jr. was down to his last chance to make the Pro Stock field at the AAA Insurance NHRA Midwest Nationals at Gateway Motorsports on Saturday and the JEGS/Mopar Dodge Avenger was making him sweat.

"The car has really put us through the wringer this weekend," Coughlin said. "I was literally under the tower ready to go through the water for Q4. I fire it up the first time, it shuts off. Same thing the second time. It was odd because I knew the car was prepared correctly."

Coughlin knew if he was going to make the show, he'd have to forge ahead no matter what the consequences.

"I fired it up a third time and kind of stumbled into the water," Coughlin said. "I thought just to do a burnout to see if it clears itself up. It never really sounded right but I thought, 'Why stop now?'

"When I put it on the chip it sounded better and it went through the gears very well."

"Bottom line is we got the car into the show," Coughlin said. "There was a little drama going through my head and the crew guys who caught wind of what was going on, but we accomplished the first step of every weekend: making it into the show.

"Step 2 is we're going to have to find a way to make up some time on Jason Line. Realistically we can find .04 seconds in the motor and if I can pull a rabbit out of my hat on the starting line, we'll find what we need to advance. Mentally, that's the plan."

Winning from the bottom half of the ladder is not a new experience for Coughlin as he's the only driver in the NHRA's pro ranks to earn a victory from all 16 qualifying spots.

Coughlin said the weekend started hopefully. The JEGS Avenger's chassis had been whipped into consistent shape over the last few races, which opened the avenue for the team to try some different engine combinations.

"We had a motor plan we wanted to try," Coughlin said. "We shipped some parts in but they didn't make it in time for Q1. We had to go to a Plan B for Q1, which made us a round behind what we wanted to run. We did a lot of work and made a bunch of changes this weekend and when you do that, it gets real tough to hit the target.

"We're not done, that's the bottom line. We've got a lot of work to do tonight but we're a determined bunch and we're going to hit it."

Eliminations at the AAA Insurance NHRA Midwest Nationals get under way at 11 a.m. EDT Sunday.