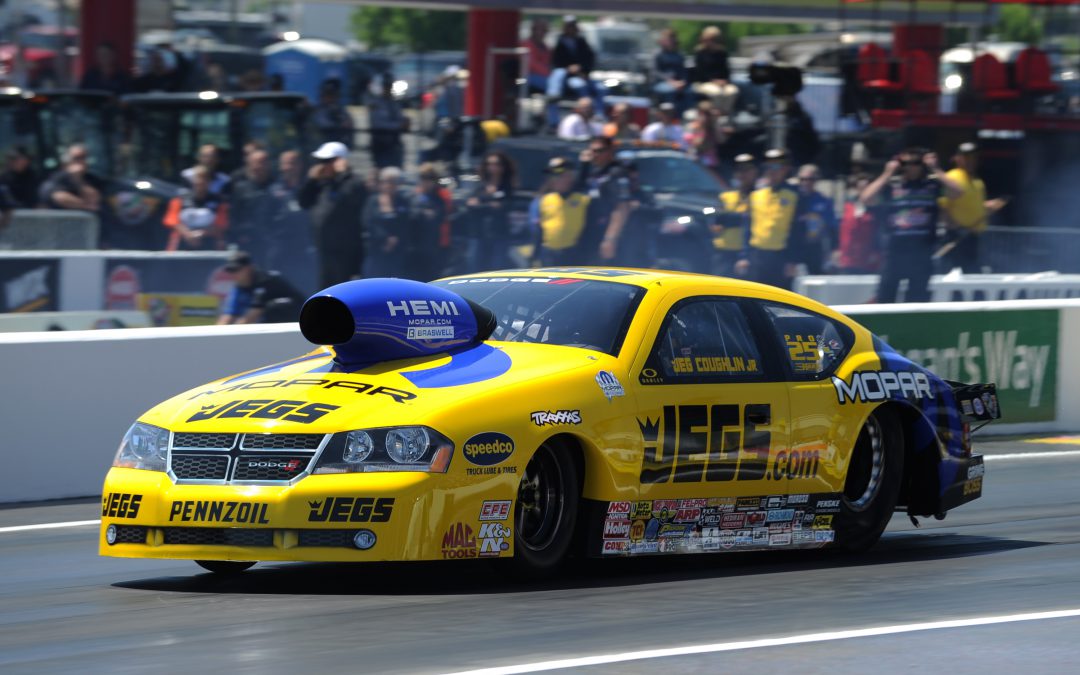 With qualifying action reduced to Saturday's two sessions due to Friday's rain and high winds, Coughlin came through with two great passes in his JEGS.com/Mopar Dodge Avenger. He opened with a 6.511 before lowering his mark to 6.495 at 212.93 mph in the afternoon.

"Things have gone really well," Coughlin said. "We came in here struggling just a little bit with my car and with the shape of this track here, where it kind of goes uphill for a stretch and then downhill, we thought that would really magnify the issues we've been having.

"We made some changes and the first run we went up there a little soft to make sure we got in the show. We didn't want to give a run away knowing we were only getting two qualifying passes. We made a real nice hit and that put us No. 4. The guys analyzed the data, made some minor changes and we ran a better number in the second session.

"I think the fixes we've made are really going to work well for us, not just here but in races to come."

Under the unique, 4-wide format, Coughlin will open eliminations with lane choice against all three opponents he'll face in Round 1. Two racers will advance out of his quad, which consists of No. 7 qualifier Jason Line (6.516 seconds), No. 10 qualifier Rodger Brogdon (6.573) and No. 15 qualifier Lewis Worden (6.681).

"We're going 4-wide," Coughlin said. "This race is Bruton (Smith's) baby and it's a lot of fun for us and the fans, as you can see by the packed grandstands. We have a fast racecar and I like our chances, but really the top eight cars here are separated by only a few hundredths of a second, give or take, so I know it's gonna be a dog fight."

Pro Stock eliminations are scheduled to begin at 1 p.m., Sunday. ESPN2 will carry all the action.