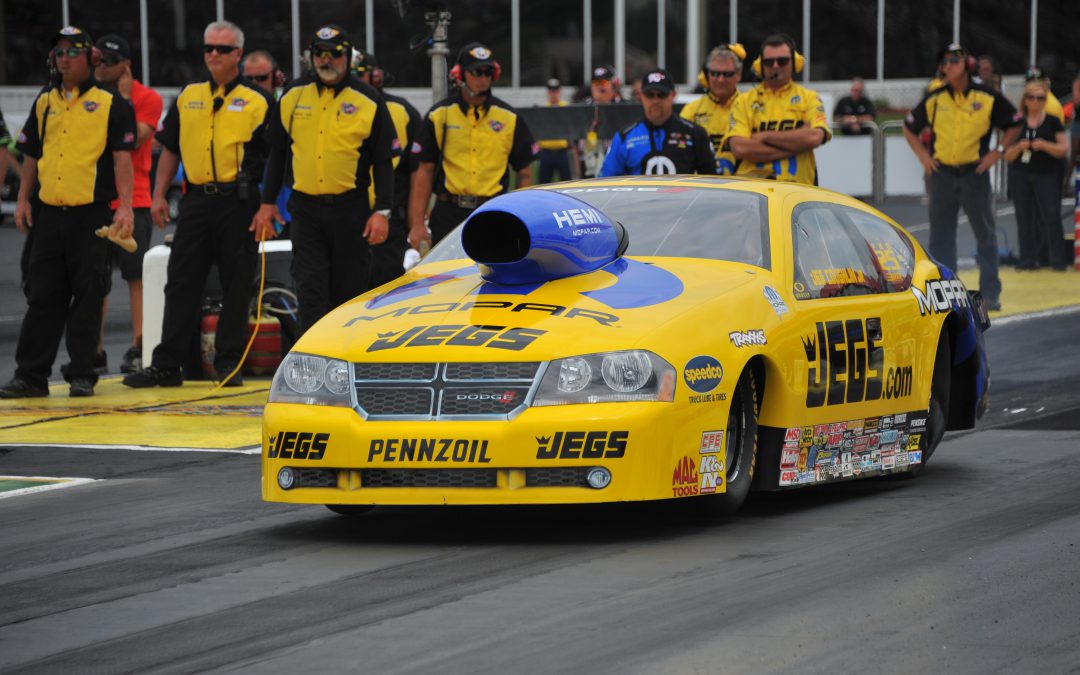 ENGLISHTOWN, N.J. (June 1) — This weekend's 44th annual Toyota Summernationals has certainly lived up to it's name as scorching temperatures during two days of professional qualifying have reminded locals of the first few incarnations of this event when it was held in July's dog days. It's been brutal for the racers as well, with the NHRA tour's most recent Pro Stock winner — Jeg Coughlin Jr. — a classic example of what happens when the temperatures rise.

"This heat has been giving us all fits," Coughlin said. "And certainly we've been no exception. We've been quick every session, but not quite as quick in relation to the field as we have been in the last several races. I think we were fourth or fifth quickest of all four rounds, which is good, but it's not quite as good as we'd like."

Despite temperatures in the 90s, Coughlin parked his JEGS.com/Mopar Dodge Avenger in the fifth slot on the race day grid after a best run of 6.589 seconds at 210.80 mph. That sets up a first-round elimination date with Steve Kent, a racer he's beaten in two previous match-ups this year. Kent will once again be the underdog in this tilt after qualifying 12th with a 6.650 at 208.78 mph.

"We're a few hundredths better than some but Mike (Edwards, top qualifier) is a few hundreds better than us, at least through qualifying," Coughlin said. "The reality is we're all pretty close and as we've seen each week out here, anyone in the field can win.

"My teammate Allen Johnson had some really solid passes in the hottest sessions so we'll swap some data and see what we can do to get us both through to the final round again. That's always the goal on race day."

Coughlin's win at the last stop in Topeka, Kan., moved him to within 76 points of Edwards. Johnson, who was runner-up in Kansas, is 45 points back in third.

"We've won here four times in the past, three times in Pro Stock, so we have a great affection for Old Bridge Township Raceway Park," Coughlin said. "When you win you know you have out-scored everybody else so another victory would be very sweet, even if it's a sweaty one."

Eliminations begin at noon Sunday. All action will be broadcast on ESPN2.