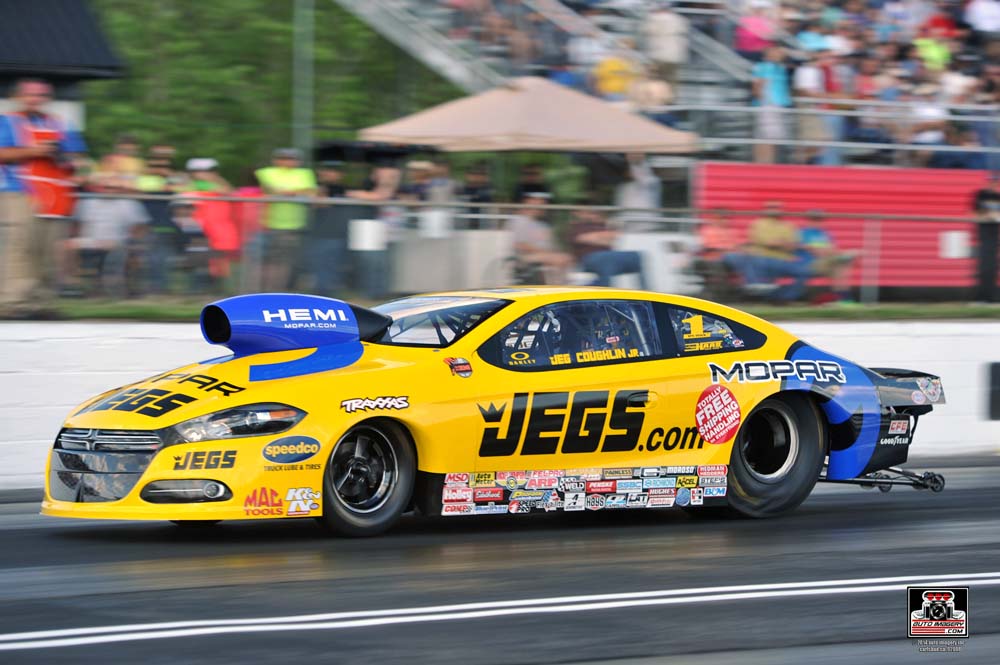 ATLANTA (May 17) – Jeg Coughlin Jr. and the JEGS.com/Mopar Dodge team have had a frustrating weekend at Atlanta Dragway, but the five-time Pro Stock champion knows Sunday's eliminations can make things brighter.

"It's been one of those weekends," Coughlin said. "Everything's here, it's in one piece, and we've got something to work with for tomorrow. But we've had an odd go."

"Everyone on the JEGS and the Mopar Dodge team will be working on both these cars, even though we've got to face off against each other in round one," Coughlin said. "We'll prepare them as best we can and let Allen and I get out there and do it."

Myriad issues have plagued Coughlin's team in Atlanta, from a balky carburetor to a stuck throttle to a failing clutch. Still, Coughlin has won enough races to know that Sunday is a new day.

"It's kind of been a comedy of errors thus far," Coughlin said. "But game day is game day, and that's what we're here for. We'll look forward to tomorrow."

"The first run we made, we didn't realize that the carburetor wasn't opening up all the way," Coughlin said. "That's probably why our speed was so poor, and our ET was down a little bit in the back half."

In Q2, Coughlin had to abort the pass when the tires shook. But that was a blessing in disguise.

"It shook pretty hard the second run, which probably made the carburetor open a little bit more, and it stuck actually," Coughlin said. "That's how we kinda found the carburetor problem Friday night."

After working on the tuneup, Coughlin made his quickest pass in Q3 on Saturday, but that could have been even better.

"We kind of took the long route down, and the car wasn't happy from about 10 feet in to about 600 feet," Coughlin said. "We lost a couple hundredths and ran a .53. We know it's all there."

"I was backing up from the burnout and didn't feel like I had a clutch pedal at all," Coughlin said. "It was like the air gap went away on it or the linkage was not adjusted properly or something broke inside the clutch itself."

Still, Coughlin is confident his team can get all the problems solved so he can have a long day Sunday.

"We've got tons of horsepower, we've got great people, great cars, great everything," Coughlin said. "Confidence is never at a low."