ALL EYES ON THE TEXAS MOTOR SPEEDWAY FOR CODY COUGHLIN 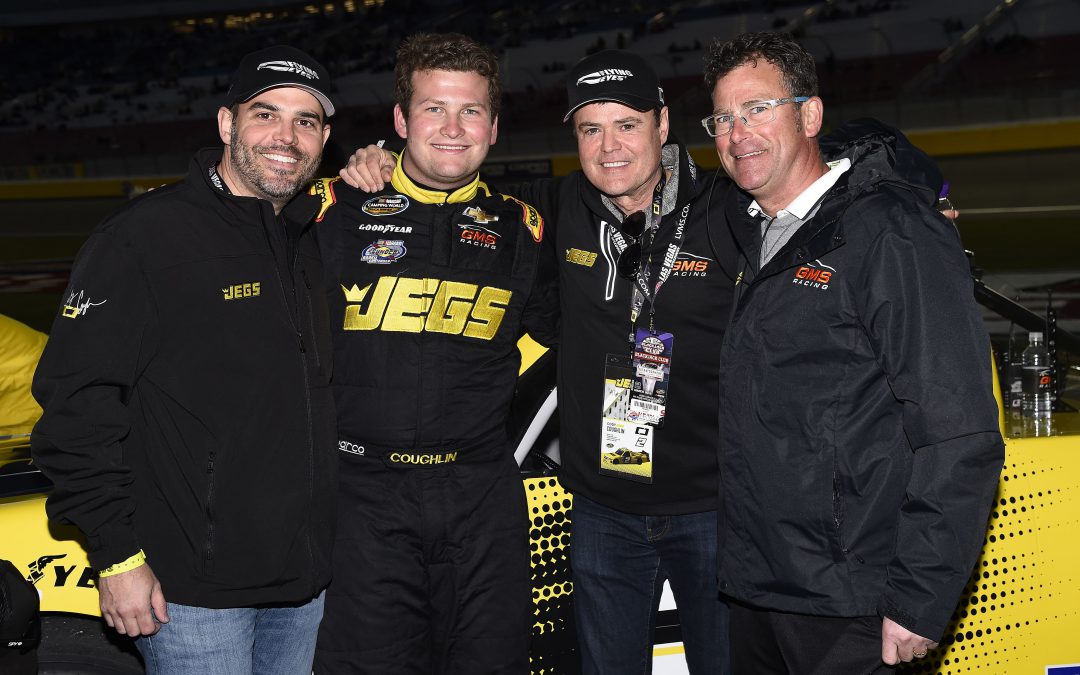 Coughlin Returns to the Texas Motor Speedway with Flying Eyes®

STATESVILLE, N.C. (June 6, 2018)—Cody Coughlin will be flying into the Lone Star State as the NASCAR Camping World Truck Series (NCWTS) heads to the Texas Motor Speedway in Fort Worth for Friday’s Rattlesnake 400 with partner Flying Eyes®.

After three top-ten finishes of the NASCAR Camping World Truck Series season, Coughlin, driver of the No. 2 Flying Eyes® / JEGS Chevrolet Silverado for GMS Racing, is hopeful he can bring home his first Texas Motor Speedway victory with Flying Eyes®.

Flying Eyes® will adorn the No. 2 Chevrolet driven by Coughlin at the Texas Motor Speedway. The eyewear is designed and engineered to fit comfortably under the pressure of a headset with high-grade polycarbonate lenses refined for optical clarity, UV400 filtering, and impact resistance. Based in Austin, Texas, Flying Eyes® announced Coughlin as an ambassador for the Flying Eyes’ brand earlier this year.

“We are proud to be associated with GMS Racing through our partnership with Cody Coughlin Racing,” Don Osmond Jr., VP Marketing for Flying Eyes Optics, said. “NASCAR exemplifies American motorsports and what we, at Flying Eyes®, are all about – the performance-driven adrenaline rush of going all-out supported by the best equipment designed through superior research, technology, and design. We'll be watching for the Flying Eyes® logo on the hood of Cody's truck as we join the millions of other fans that make NASCAR such an important, exciting part of America."

“The last two races were at mile-and-a-half tracks, but even though the Texas (Motor Speedway) is one as well, it’s not the same for sure,” Coughlin said. “The track has a lot more grip in Turn 3 and Turn 4 since being repaved, but Turn 1 and Turn 2 were flattened, so it is really tricky there now. But overall, I like the track a lot. Texas is basically one groove until it can weather down more and then the groove can widen. It will be interesting to see what the racing is like with the new splitter package and see if it helps with passing.”

In NASCAR Camping World Truck Series starts on speedways (tracks 1 to 2-miles in length), Coughlin has recorded one top-five and five top-10 finishes. Two of the top-ten finishes happened recently, at the Las Vegas (Nev.) Motor Speedway and the Kansas Speedway.

Since entering the NASCAR Camping World Truck Series in 2013, the Statesville, N.C.,-based GMS Racing team has logged 21 starts at the Texas Motor Speedway, resulting in two victories, five top-five finishes and 14 top-10 finishes, with an average starting position of 10.2 and an average finishing position of 9.6 with 198 laps led at the Fort Worth, Texas,-facility.

Jerry Baxter, crew chief for the No. 2 JEGS Chevrolet Silverado, has two top-five and seven top-10 finishes in the NASCAR Camping World Truck Series at the Texas Motor Speedway in 11 starts. In addition, he has one top-five and four top-ten finishes in 10 NASCAR Xfinity Series (NXS) starts and one Monster Energy NASCAR Cup Series (MENCS) start.

The Rattlesnake 400 will be broadcast live on FS1 on Friday, June 8 starting with NASCAR RaceDay: NASCAR Camping World Truck Series at 8:00 p.m. (ET). It will also broadcast live at 8:30 p.m. (ET) on the Motor Racing Network (MRN) and SiriusXM NASCAR Radio. Qualifying for the eighth event of the 2018 NASCAR Camping World Truck Series schedule will air on Friday at 5:30 p.m. (ET) on FS2.