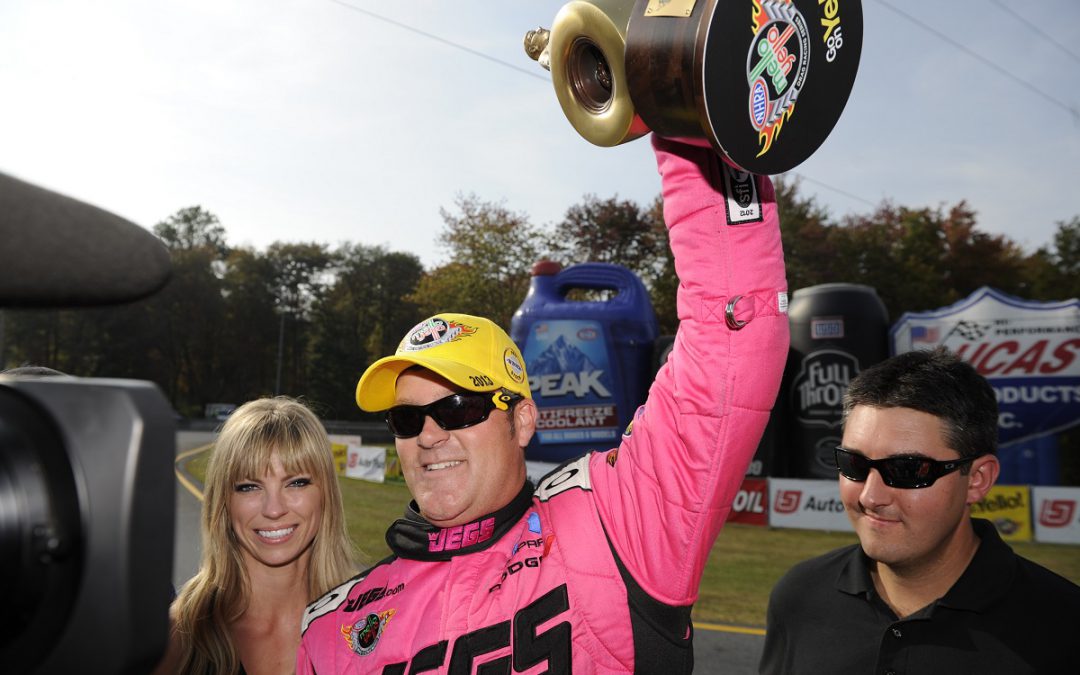 The effort will be spread across NHRA, ARCA, CRA and other special events, as well as including 10 Coughlin family members.

"October, with it being Breast Cancer Awareness Month, is near and dear to a lot of our hearts, not just here in America but around the world," Jeg Coughlin Jr. said. "Being affiliated with the James Cancer Hospital at Ohio State University with the JEGS Foundation, we couldn't be more proud to work with our partners there and with Mopar, Dodge, Mac Tools, Oakley, Speedco & Traxxas, to turn this car into a nice tribute to breast cancer awareness."

In addition to his JEGS.com/Mopar Dodge carrying a pink paint scheme in NHRA Pro Stock races, Jeg Coughlin will wear a special Nick Pastura-designed helmet and an Oakley-designed firesuit for breast cancer awareness. His team will also sport pink Oakley-designed crew shirts for the month, which kicks off with the NHRA Nationals this weekend at Maple Grove Raceway in Reading, Pa.

"There are lot of patients out there who have been affected, a lot of care-givers who have been affected, and if we can help spread the cheer as the whole month does through a multitude of arenas – not just in drag racing or motorsports – we're happy to do so," Coughlin said. "Early detection is the key with any illness, certainly with most cancers. We're proud to do it and kick into October that way."

Troy Coughlin's Chevrolet Corvette Pro Mod will carry the pink theme in a special race in Norwalk, Ohio this weekend, and in the NHRA Pro Mod race at The Strip at Las Vegas Motor Speedway.

"I’m pretty excited about it," Troy said. "We did it for the first time on my stuff last year, and Jeg's done it for a couple years now. It's been a pretty neat to bring awareness to breast cancer and all cancer. It's neat to be a part of it and to be a part of making the world a better place."

Troy's son, T.J. – who always wears a pink fire jacket when he races – will have his Sportsman cars in pink, too. He'll race in the NHRA national events in Reading and Las Vegas.

"It's one of the coolest causes there is," T.J. said. "Pink is very fluorescent and a wild color. It's a great cause to support, and there are a lot of fans we impact. Hopefully we can show fans we care and we support them."

Troy Coughlin's daughters Paige and Kelly will race pink Junior Dragsters throughout the month, as will Mike Coughlin's sons Jack and Clay. Makenna Brown also plans to race in a pink JEGS.com Junior Dragster. All of the kids will also be wearing pink crew shirts to show their support.

Cody Coughlin, John Coughlin's son, will carry a pink paint scheme on his stock car for the month, racing in ARCA at Kansas Speedway and in the CRA race in Winchester, Ind.