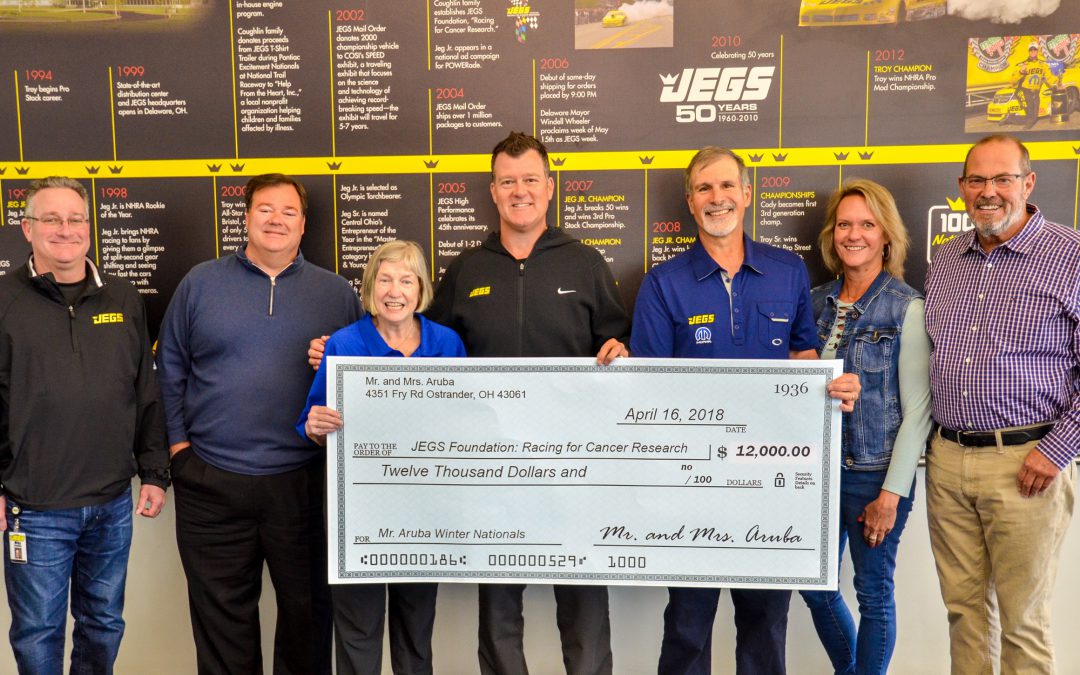 DELAWARE, Ohio (APRIL 30) – What started as a way to get through the long, cold Ohio winters has turned into a cool way to raise money for the JEGS Foundation for Cancer Research.

Mike DeChicco and Jane Graebner, aka Mr. and Mrs. Aruba, started the party in 2005, using a practice Christmas Tree in DeChicco's basement, which has been dubbed "Ostrander International Raceway", in Ostrander, Ohio. Family and friends bought in to participate, with any money raised going to the JEGS Foundation. It's been a mid-winter staple ever since.

"We can't thank Mike and Jane enough for this annual event and for what they continue to do for the JEGS Foundation for Cancer Research," said Jeg Coughlin Jr., co-owner of JEGS, which started the JEGS Foundation in 2003. "Mr. and Mrs. Aruba have raised a lot of money for cancer research at Ohio State University and Nationwide Children's Hospital, all with a fun, home-grown event.

"I always look forward to the Winter Nationals and the good time that is had by all who participate. They threw me a little curveball this year, but we had a good time, and most importantly raised some money for a great cause."

The twist for Coughlin, a five-time Pro Stock champion and one of the best drag racers in the history of the sport, was not being able to use his fingers to activate the Tree during his race.

Coughlin Jr. won the "No Finger" race, as it turned out, earning bragging rights in just one of several races held during the Winter Nationals. Lonnie Smith won the Gambler's Race, Dale Thum the FireCore Wires race and the grand prize raffle, Jason Wheatcraft the 50-/50 raffle and DeChicco won the Chip Foust Memorial Race in a run-off with Ron Richards to win one of Coughlin's race-worn firesuits. Many of the cash winners donated back to the pot for the JEGS Foundation.

"Yes, I'm a risk-taker, and it paid off (in the Chip Foust Memorial Race final)," DeChicco said. "To top it off, the last race everyone was under the same rules. Thank you to all of you for going along. Fun was had by all!

"This event is and always will be equal to the sum of its parts. Thank you to everyone for stepping in and stepping up. Jane and myself will continue to twist and shout while keeping the doors open for next year's 15-year anniversary reunion. Thank you all for helping to make this event one of the highlights of our year. It was one to remember, for sure."

This week, DeChicco and Graebner presented this year's check for $12,000 to the Coughlin family on behalf of the JEGS Foundation.