Another Double-Dip Weekend as Coughlin Chases a Dream 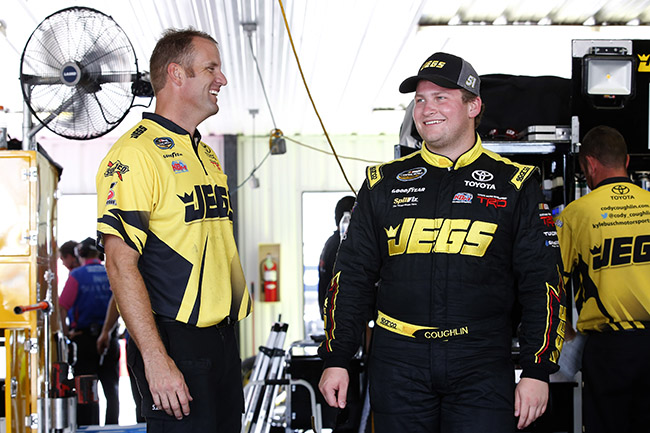 Running full-time in two Champion Racing Association divisions and close to 10 NASCAR Camping World Truck Series races has led to some busy weekends for Cody Coughlin in 2016.  Perhaps no weekend will be busier than his next one.

Three races.  Two days.  Two states (with more than a thousand miles between them). Three different race cars. The 20 year-old Coughlin is eager for this challenge.

The weekend starts off with Coughlin heading to the Granite State to take on the New Hampshire Motor Speedway with Kyle Busch Motorsports in the NASCAR Camping World Truck Series on Saturday, September 24. The UNOH 175 on Saturday will be Coughlin’s seventh start of the season and his first at “The Magic Mile.”

The Joe Gibbs Racing Development driver will compete in two races in one day on Sunday, September 25.  The JEGS/CRA All-Stars Tour will have a 100-lap race for the Pro Late Models, which will be followed by 100 laps for the Super Late Models of the ARCA/CRA Super Series.

Coughlin leads the points in both the ARCA/CRA Super Series and the JEGS/CRA All-Stars Tour with two races left in each division.

“This weekend is going to be fun, hectic and stressful all at the same time,” Coughlin said.  “I’m excited to get back in the KBM truck and run at another new race track.  I’m also really looking forward to getting back to Indianapolis to run two races there.  I think we’ll have a really good chance at winning both of them and continuing our hunt for both CRA championships.”

The Ohio native’s best finish at Lucas Oil Raceway was a third-place result in the August 2015 with the CRA Super Series.  He rallied from a flat tire at the halfway mark to get back to the podium.

“We’re still seeking that first win at Lucas Oil Raceway, but I think this is finally the weekend,” he said.  “My family has had so much success on the drag strip right behind the frontstretch.  I’d really like to be able to make my own mark at Lucas Oil on the oval track and I think we’ve got two good shots at it on Sunday.

“I just have to thank my family for all of their support.  My parents (Di and John) go above and beyond, and my sister Kennedi is at every race that she can make.  My Late Model team is also amazing.  From the start of the season, my Jack (Smith, crew chief) has made all the right calls.  Kevin (Hamlin, team manager), Scott (Wimmer, spotter), and Dave (Holt, crew member) have worked so hard and together they have put us in a position to win two championships this year.

“I also have to thank Kyle and Samantha Busch for letting me drive their trucks this year.  It’s been a real honor to race for them.  I’ve been very blessed by our Lord, for sure.”

Sunday’s schedule at Lucas Oil Raceway will begin at 1 p.m. ET.  The JEGS/CRA All-Stars Tour feature will be the second feature of the day.  The ARCA/CRA Super Series event will be the fourth and final race on Sunday.