Another Double-Duty Weekend Ahead for CRA Points Leader Coughlin 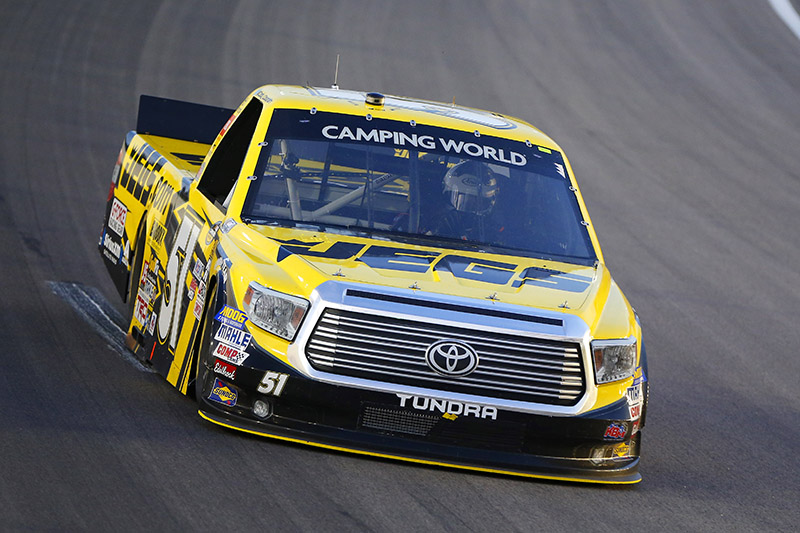 For the second time this season Cody Coughlin will be pulling double-duty.  The Joe Gibbs Racing Development Driver will make his third NASCAR Camping World Truck Series start this season for Kyle Busch Motorsports at the Texas Motor Speedway on Friday night, and then he will head north to Marne, Michigan for the Battle at Berlin 251 Super Late Model race at Berlin Raceway with the ARCA/CRA Super Series.

The Ohio native has been on a hot streak in Super Late Model competition this year.  Coughlin is riding a streak of three wins-in-row (Toledo Speedway, Anderson Speedway, Baer Field Motorsports Park) and is leading the ARCA/CRA Super Series points standings.

Coughlin’s best finish at the tricky 0.4375-mile Berlin Raceway is a fifth-place result that he scored last year, but with the success he’s seen so far this year, Coughlin believes this Monday he’ll have the best chance at winning at Berlin he’s ever had.

“With the cars that Jack (Smith, crew chief), Kevin (Hamlin, team manager), Scott (Wimmer, spotter) and Dave (Holt, crew member) have been giving me, I feel like I can win every single time we unload,” said Coughlin.  “A win at Berlin would be huge because it hasn’t been the best place to us in the past.  But with the success that we’ve had, we have momentum on our side so I’m really excited to go there.”

Before Coughlin heads to Berlin he heads to Fort Worth, Texas for Friday night’s NASCAR Camping World Truck Series Rattlesnake 400 to race the No. 51 Toyota Tundra for KBM.  It will be Coughlin’s third NCWTS start this season and fourth of his career.

“I’m excited to be doing double-duty with the KBM guys and my Super Late Model guys,” Coughlin said.  “I’m eager to head to Texas and race the truck again.  I really enjoy working with Bono (Kevin Manion, crew chief) and all of the KBM guys.  I also have family in Texas, so it will be cool to race in front of them under the lights.

“I look forward to every race because I’m very thankful of the opportunities that Joe Gibbs Racing and Kyle Busch Motorsports have given me.  I’m also so glad to have the love and support from my parents, Di and John, and my sister Kennedi.  Without them, and the blessings that our Lord have given us, I wouldn’t be where I am now.”

Coughlin will take to the track in Texas for the first time on Thursday, June 9 for practice.  There will be three practice sessions on Thursday, beginning at 3:30 p.m. ET, and ending at 8:55 p.m. ET.  Qualifying will take place on Friday, June 9 at 6 p.m. ET with the 167-lap race to follow at 9 p.m. ET.