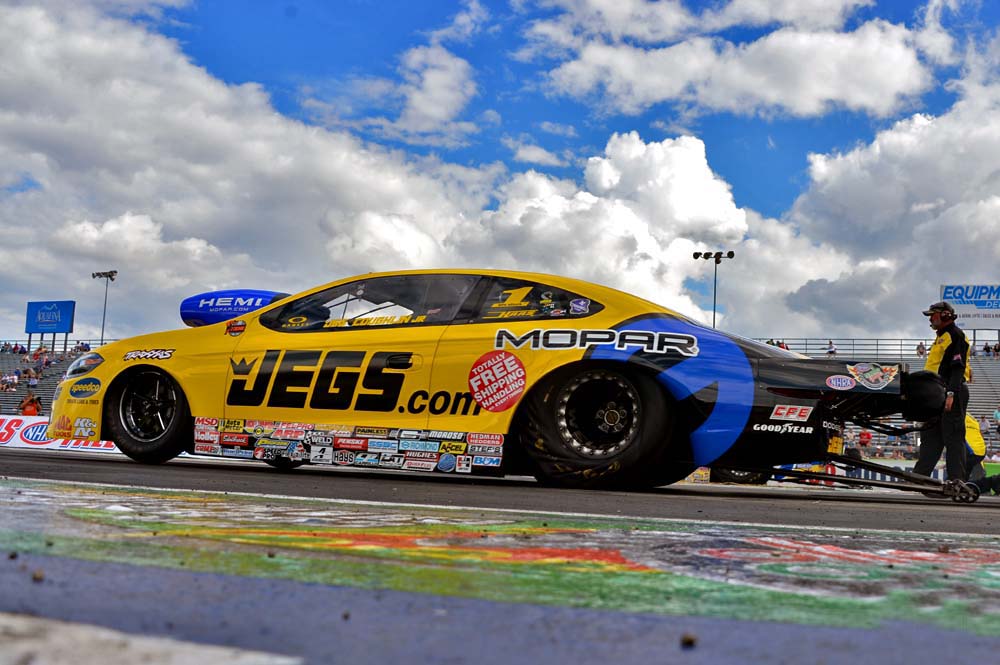 DALLAS (Sept. 20) — Five-time and reigning Pro Stock champion Jeg Coughlin Jr. has drawn a familiar foe for the first round of this weekend's 29th annual AAA Texas NHRA FallNationals with four-time titlist Greg Anderson on the opposite side of the ladder.

"We've battled many times with Greg and we've certainly had some fun through the years," Coughlin said. "He's a familiar foe and a great racer who definitely keeps you on your toes. He's won a bunch of trophies and four championships, so we expect another tough race. I wouldn't want it any other way.

"The guys made some good progress with the JEGS.com/Mopar Dodge Dart today, and we expect the same sort of conditions tomorrow, so we should be in good shape. As always, we'll be ready for the fight, against Greg and anyone else we have the opportunity to race. It's game time now."

Coughlin earned lane choice over Anderson by the slenderest of margins, posting a best of 6.596 seconds at 209.59 mph in qualifying under the Friday night lights. Anderson was just a tick back with a 6.597 at 210.31 mph. Neither driver improved Saturday due to increased track temperatures.

"We made a great pair of passes Friday and felt like we knew exactly what we wanted to do today when we ran the (postponed) second round of the Charlotte race," Coughlin said. "Unfortunately, the car made a big move off the line and we ended up almost a complete car width outside the groove. I was trying to coax her back, but as I went through the gears I saw Vincent (Nobile, opponent) just slowly pulling away. There wasn't much I could do to catch him at that point.

"The final qualifying session was much better and we're pleased with the adjustments we made. We'll be ready to race tomorrow and see if we can't lock down another Dallas trophy."

Eliminations begin at noon, Sunday. ESPN2 will carry all the elimination action.