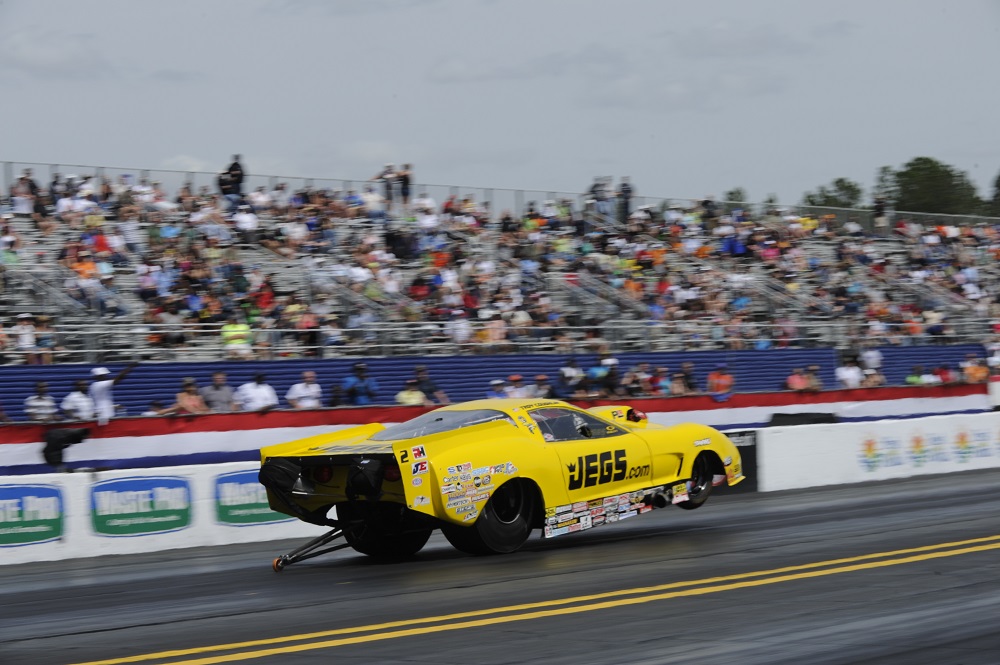 HOUSTON (April 22) — Just two races removed from one of the biggest victories in his professional drag racing career, two-time world champion Troy Coughlin is intent on claiming another Wally trophy when the NHRA Pro Mod Series returns to action this weekend at Royal Purple Raceway in Baytown, Texas.

Coughlin, the 2012 Pro Mod champ, won his fifth race in the extremely popular class at the season-ending event last October in Las Vegas. The victory was significant as it marked the 100th national event win for the Coughlin family, which now fields cars from a third generation of drag racers, including Coughlin's own son Troy Jr.

"It was a special win for sure," the senior Coughlin said of his Las Vegas trophy. "Having my brother Jeg and my son T.J. there to celebrate made it even better. But that was then and this is now and we have a new season and a new title chase to think about. That's really what has me excited about Houston — another chance to race."

Coughlin should be a contender this weekend. In his only NHRA Pro Mod start of 2014 in Florida, he upset Jason Hamstra to setup a huge showdown with former Team JEGS crew chief "Tricky Rickie" Smith. Coughlin and Smith went down to the wire for last year's championship with Smith coming away with the hardware by a slight margin.

Wishing to avenge last year's outcome, Coughlin and crew had his twin-turbo JEGS.com Corvette revved up to demoralize Smith in Florida but the car was a little too aggressive and started lifting the front wheels well off the ground nearly 200 feet into the race. That forced Coughlin to abort the run to avoid the accident, handing the win to Smith.

"It was a fun race up until then," Coughlin said. "I think Rickie and I bring out the best in each other and since he's the reigning champ now, he's the guy we need to beat to regain the crown.

"After Gainesville we decided to go and race in a PDRA event in Rockingham, N.C., to try and get the car calmed down and a little more stable. We put a ton of runs on the car in testing and qualifying and we even entered the race to get a few more laps in the books. We didn't want to upset the guys that race that series full time so we weren't trying to win. It was just a matter of getting more full runs in under race conditions.

"Everyone was really pleased with the results and we feel like that really prepared us for Houston. The PDRA puts on a great show and we had a blast. I think we'll probably take in a few more of those events this year. For now, the focus is Houston and getting another victory."

There will be three Pro Mod qualifying sessions scheduled for 6 p.m., Friday, and 2 and 4:30 p.m., Saturday. Eliminations start at 9:45 a.m., Sunday. Live timing results are available at NHRA.com.