Another top finish for Jeg Coughlin Jr. keeps him in top contender status 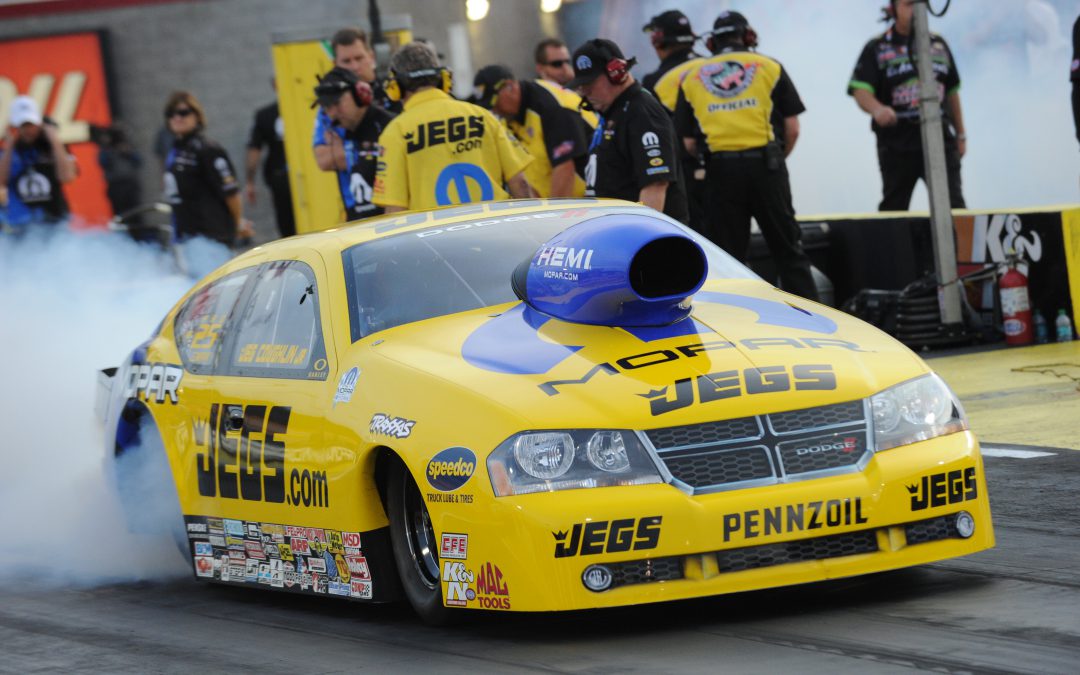 LAS VEGAS (April 7) – Jeg Coughlin Jr. and the JEGS.com/Mopar Dodge Avenger reached the semifinals for the third time in four races this season on Sunday at The Strip at Las Vegas Motor Speedway.

Coughlin beat Matt Hartford and Rodger Brogdon before falling to teammate Allen Johnson, who was Kryptonite to Coughlin's Superman this weekend.

Johnson knocked Coughlin out of the first round of the K&N Horsepower Challenge on Saturday, and Coughlin said Sunday's semifinal matchup unfolded in similar fashion.

"We had a little too much wheel speed yesterday morning and had a little bit here as well," Coughlin said. "It rolled out nice and just started shaking about a quarter of the way through low gear."

Coughlin said he did everything he could to get the JEGS Avenger to settle down, but by the time he got the job done, Johnson had already pulled away.

"When it starts (shaking) the rpms on the engine go straight up," Coughlin said. "At that point you are trying to get it into any gear you can just to try and save the run. I got it into second real quick, third real quick — all in about a second's time. Then it really pulled the motor down hard.

"I looked up and saw A.J. kind of running away with it, so I banged it into fifth gear and called it a day. It sounds like they were just on the edge of aborting their run too."

"We've got a strong car and a really strong team," Coughlin said. "We've got a little work to get this car to run its best in the heat of the day. This is really the first heat we've had all season."

Against Brogdon, Coughlin was off the starting line first as usual and never looked back. Coughlin crossed in 6.694 seconds at 206.83 mph. Brogdon had to push in the clutch to avoid an accident and finished the race in 12.603 seconds at 38.95 mph.

"The plan has been continue doing what we've been doing," Coughlin said. "We just want to continue turning the win light on. We're making good laps, we're making consistent laps. I feel like I'm driving really well and that's a really good package to have. I'll take that any day."

Up next for Coughlin and the JEGS.com/Mopar Dodge is the April 19-21 Dollar General 4-Wide NHRA Nationals from zMax Dragway in Charlotte.