2018 series Champion and 2020 series Regular Season points Champion Josh Brock, is already locked into the final four Chase for the Championship drivers who will race for the season Championship at the Winchester 400, and leads the series points heading to Toledo Speedway. Michael Simko, a former ARCA Menards Series competitor, is second in series points after getting a second-place finish in the series first Chase event on September 6th at Lebanon I-44 Speedway. 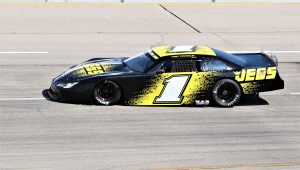 Cody Coughlin is looking good in the new JEGS scheme

On Friday, September 18th, there will be optional rig parking from 6 pm to 7pm. There will be no unloading of equipment on Friday.

Race day begins on Saturday with pit registration opening at 8:30, pit gates will open at 9am. Practice will go from 12pm to 3pm on a rotating basis with the ARCA/CRA Super Series teams receiving two, 30-minute sessions. Qualifying will begin at 3:30pm. Racing will begin at 5pm with the Victory Custom Trailers CRA Junior Late Models eight lap heat races, the ARCA/CRA Super Series 100 lap event will be up next, followed by the Victory Custom Trailers CRA Junior Late Models 25 lap feature, the ARCA Gold Cup Outlaw Late Models 100 lapper will cap off the evenings racing events. The rain date if needed is Sunday, September 20th.

Additional event and track information can be found at www.toledospeedway.com.

Additional information on the ARCA/CRA Super Series can be found at www.cra-racing.com.