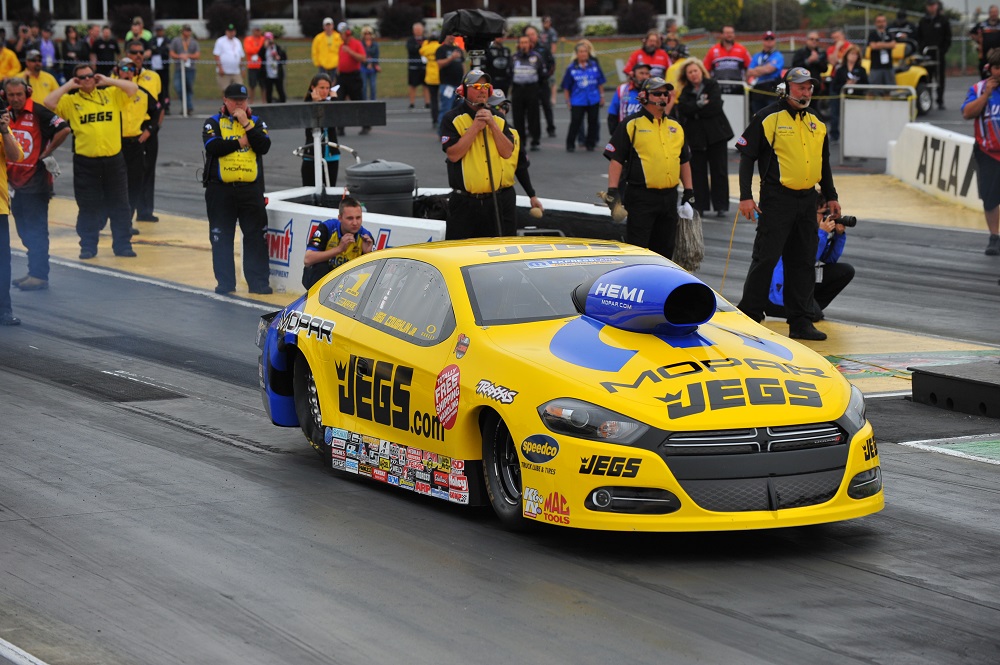 ATLANTA (May 19) — The strength of Jeg Coughlin Jr. and the JEGS.com/Mopar Dodge team was on full display Monday at Atlanta Dragway.

Coughlin and his team bounced back from a "comedy of errors" earlier in the weekend, and the five-time Pro Stock champion scored his 57th career victory in the ultra-competitive class.

The Friday and Saturday qualifying sessions weren't pretty, as Coughlin's team was beset with struggles with the tune-up, a balky carburetor, a stuck throttle, and a failing clutch, but after rain and poor track conditions bumped Sunday's eliminations to Monday, the J&J Racing team was on its game.

"I've got to give a lot of thanks to (team owners) Roy and Allen Johnson, (crew chiefs) Mark Ingersoll and Adam (Hornberger), and both teams," Coughlin said. "They did one heck of a job with the rebound this weekend."

Coughlin capped the race and the weekend against four-time Pro Stock champion Greg Anderson in a battle of two of the sport's best. After both were stellar on the Christmas Tree, Coughlin sped away with a pass of 6.558 seconds at 211.63 mph to edge Anderson's 6.588 at 212.13 mph.

"He was doing one heck of a job behind the wheel today and was sawing the Tree down," Coughlin said. "We knew we'd have to be on our best behavior in the final. It was a great win for us."

The victory was Coughlin's first of the season after winning the 2013 Pro Stock championship.

"Winning the championship was fantastic, and we really felt like we had a ton of momentum coming into 2014," Coughlin said. "To see some of the pit falls we've been through, we wanted to pull our hair out, but as a team we said, 'Listen, we need to be patient, we need to double-check each other, and we need to do as good a job as we can getting this car to go straight and be as efficient as it can, and results like today would have the opportunity to happen.' "

Coughlin started the day in a matchup with teammate Johnson, but the race ended quickly when Johnson's Dart struggled off the starting line. Coughlin's pass was 6.636 seconds at 210.87 mph, and it put him against Erica Enders-Stevens in the second round.

Enders-Stevens won the most recent race, in Houston, and was the No. 1 qualifier in Atlanta, but Coughlin had an immediate advantage of .044-second with a .026-second reaction time and was never behind. Enders-Stevens' run was 6.533 seconds at 209.52 mph while Coughlin advanced to the semifinals with an improving 6.551 at 211.30 mph.

"We had an extremely tall mountain to climb," Coughlin said. "We redistributed the car a little bit against Erica. She was low for the round, and we knew they'd be tough. I felt like we'd have to get a couple hundredths out of the gate to keep us out in front, and fortunately we were able to get that and get the car much happier."

That set up the epic battle with Anderson, and Coughlin savored the Wally after the win.

"This is one of the marquee events on the NHRA tour," Coughlin said. "As a kid I remember coming here and watching my dad and later coming to watch my brother John race. Atlanta Dragway has always been a place where you want to do well. Fortunately, we've had great success here."