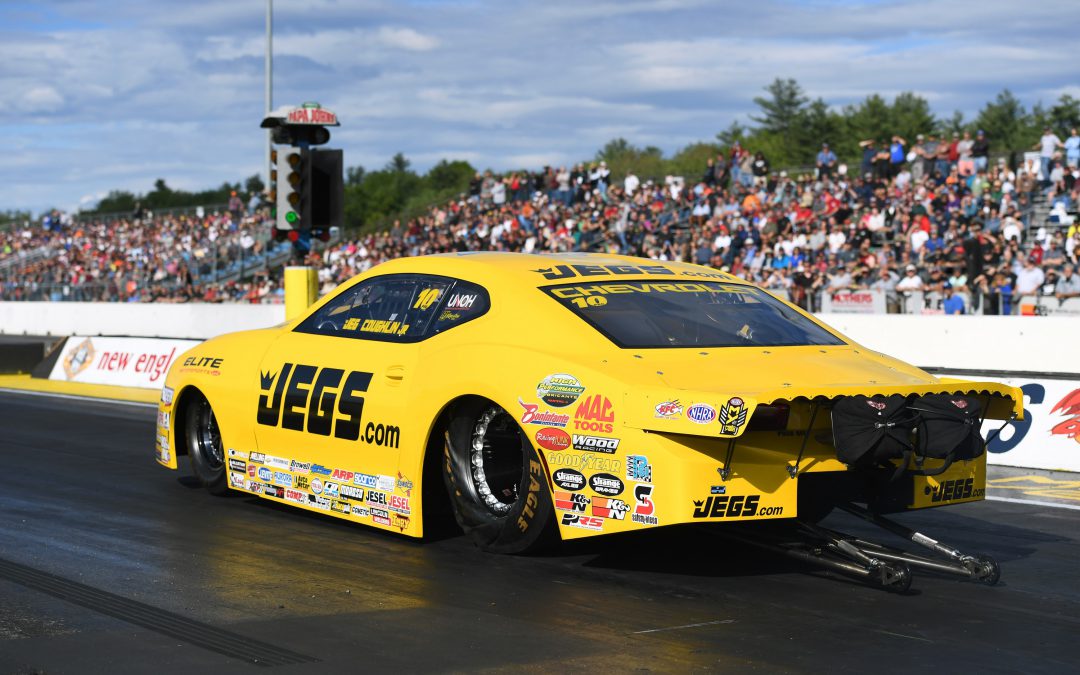 EPPING, N.H. (June 3) — It's inevitable when your team fields three full-time and one part-time car in one professional category of NHRA drag racing that you will race your teammates on occasion. Such is the case for five-time Pro Stock champion Jeg Coughlin Jr., who will face stablemate Vincent Nobile in Sunday's opening round of elimination action at the fifth annual NHRA New England Nationals.

"It's always tough when you run your teammates because we want all our cars to advance," Coughlin said. "It's especially hard when you get them in the first round but nevertheless it happens so all we can do is go up there and try our best. It's already happened a few times this year for me and I know Vincent and Erica (Enders, teammate) have squared off a number of times as well.

"Running Vincent requires that you get up on the wheel, cut a darn good light because you know he will, and then getting your car down the track as efficiently as possible. He's always a tough draw and I don't expect anything different tomorrow."

Coughlin qualified his JEGS.com/Elite Performance Chevrolet Camaro in the No. 6 spot with a best pass of 6.530 seconds at 212.59 mph, posted in Saturday's first session. Nobile was just a few spots back, earning the ninth slot with a 6.552 at 211.73 mph. So far in 2017, Coughlin and Nobile have raced twice with each driver taking a win.

Normally, the sixth-ranked car wouldn't race the ninth-best car but with only 14 cars on the property this weekend at New England Dragway, NHRA officials modified the standard ladder, pitting the two against one another in Round 1.

"We feel pretty good no matter who's in the other lane," Coughlin said. "We came in her with a new combo in the car and we opened with a soft 6.59 just to get a baseline run in the books. Mark (Ingersoll, crew chief) just tuned it from there and our next three passes were within one-hundredth of a second of one another so we're pleased.

"People ask why we'd change the tune-up after racing to a runner-up finish two weeks ago in Topeka but I'd tell them Pro Stock is an R&D class where you never stop trying to improve. The guys said they wanted to try some new parts and pieces and I completely trust they know what's best.

"We're still not 100-percent with this new tune-up but four runs into it, things look very promising. It's summer time. We're going to see a lot of hot tracks on through the rest of the regular season and into the countdown so this was the right time to make a move."

"Hat's off to these fans," Coughlin said. "As expected, they've been awesome and as I said at the start of the weekend, I'd love to bring them into the winner's circle with this JEGS team tomorrow afternoon."