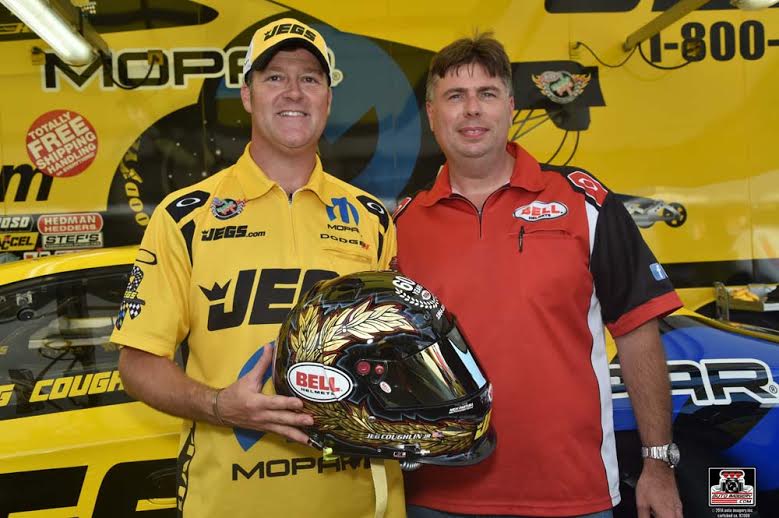 The helmet was designed and painted by noted motorsports designer and artist Nick Pastura.

NHRA fans are welcome to come to the JEGS.com pit area to watch the presentation.

"Jeg is very important to what we do because of the exposure that he can bring, week in and week out, through his performance on the racetrack," Hallett said. "He grew up in the Sportsman ranks, starting from the bottom and working his way to Pro Stock.

"Our core market is the Sportsman racer, so it's nice to get a guy like Jeg, who became a world champion, so we can market to them."

Pastura, owner of Nick Pastura Motorsports, has designed and painted helmets for numerous drivers in NHRA and NASCAR, including Coughlin, Dale Earnhardt Jr., Tony Stewart, and Kevin Harvick. He used gold leaf as part of the Bell 60th Anniversary helmet for Coughlin.

"Bell had an iconic symbol with a retro-looking horse from back in the day," Pastura said. "The concept with leafing from anniversary logos was fitting to do that, and we did it in 23-carat gold to create some leafing going around the helmet. It created a Greek look of a crown, and it was a very elegant, classy look.

"We put the horse logo from Bell on the back, which gave it a really cool '50s look. We didn't think it was going to work, but it actually worked being on the back. It turned out very nice, and it's a very classy look for an anniversary."

Officials from Bell Helmets were thrilled with Pastura's work.

"We are absolutely ecstatic the way it turned out," Hallett said. "Nick does a great job, and everything we send him, we always get some really cool stuff back from him. For him to paint this helmet is really cool for us."