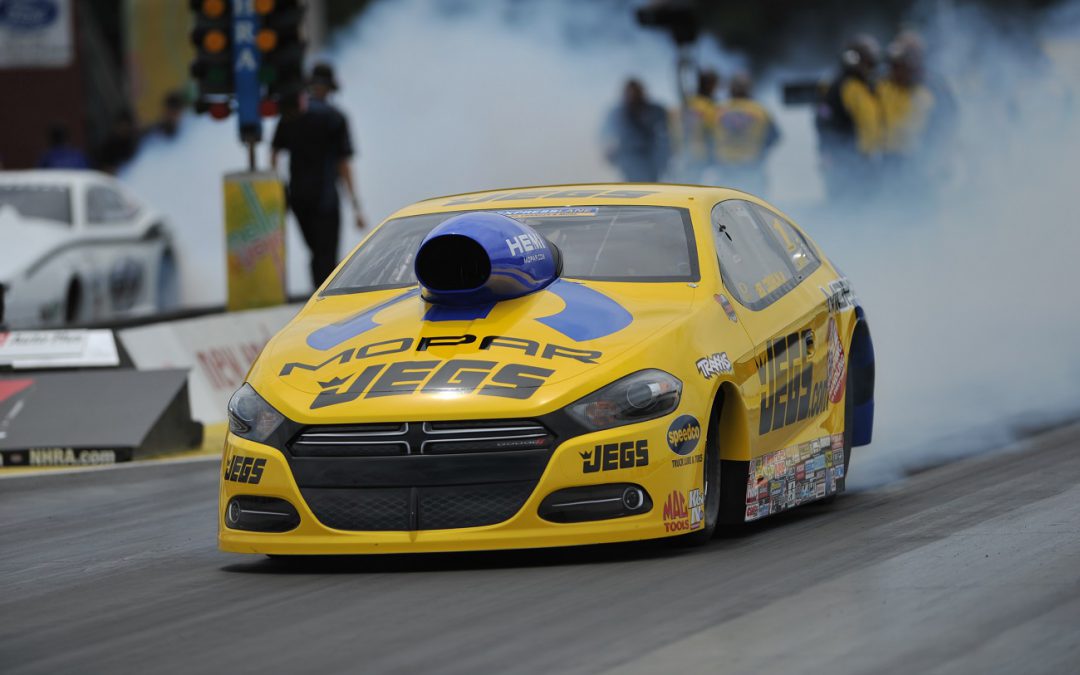 CHICAGO (June 23) — No one in the 16-year history of Route 66 Raceway has won more drag races here than five-time and reigning Pro Stock world champion Jeg Coughlin Jr. His five victories, including last year's triumph over fellow multi-time champion Greg Anderson, are the most by any driver in any pro category.

"We've had an affinity for this track ever since it opened in 1998, and the fact we've had a lot of success here certainly plays into that," Coughlin said. "This was the track that took drag racing to an entirely different level. I vividly remember pulling in here the first time and seeing this giant stadium they built for us and just being in awe.

"Being a Sportsman racer from Ohio, the city of Chicago is special all on its own because it's in Division 3, so it's a place we visit a lot and a track where we've raced a lot through the years. There's something of a home-field advantage here. It just feels comfortable."

"This JEGS.com/Mopar Dodge Dart has been great since we switched to it in March," Coughlin said. "Both our car and my teammate Allen Johnson's Magneti Marelli Dart have been so strong. You're always picking away at them and looking for more, and sometimes that gets you, but all in all these cars have been fantastic.

"I'm excited for this race. We feel fully capable of challenging for the trophy again, and our past successes have put a little extra pep in our step. I know the fans will be awesome to us because they always are, and we're anxious to give them a big show."

Together with his three brothers, Coughlin spends his time away from the racetrack running JEGS Mail Order in Delaware, Ohio. The company, which sells high-performance parts, will have a huge presence at this event as it sponsors the annual JEGS Allstars race, which pits the top Sportsman racers in each of NHRA's seven geographic divisions against one another and their respective teams in the biggest Sportsman event of the year.

"We stay extremely busy at the event and we are definitely looking forward to it," Coughlin said. "As a former competitor in the JEGS Allstars race, I know how important it is to the racers and I'm excited to see them get after it. I'll be the biggest fan in the stands when those guys and gals are up there racing, and we're very proud to have JEGS as the title sponsor once again. Sportsman racers are our biggest customers and this is one of the ways we express our gratitude to them."

Pro Stock qualifying sessions are scheduled for 4:30 and 7:15 p.m., Friday, and 4:15 and 7:15 p.m., Saturday. Eliminations begin at noon, Sunday. ESPN2 will carry all qualifying and elimination action, including live coverage of the final two rounds.