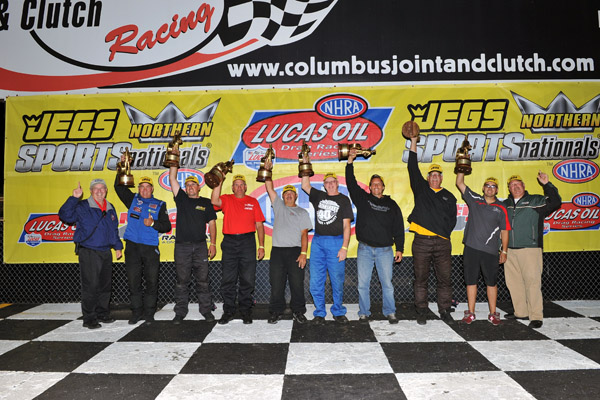 HEBRON, Ohio (Sept. 22) – For the second-consecutive year, David Billingsley was crowned the champion of the JEGS Northern SPORTSnationals at National Trail Raceway. Billingsley, of Decatur, Ill., successfully defended his title in the Comp Eliminator class when he drove his ’93 Cutlass to a final round win over local racer Chuck Haubiel of Gahanna, Ohio. Billingsley, who came from the No. 11 qualifying spot, won with an 8.70 elapsed time in his L/AA classed entry.

Belanger, of Elizabeth, Ind., had his work cut out for him as there were a total of 99 drivers competing in the Super Stock class. In the final, he drove his ’05 Cavalier to a 9.27 elapsed time to defeat veteran racer Kenny Schindler’s ’71 Corvette.

After many years of dedication and effort, Beach, of Delaware, Ohio, finally got to celebrate an NHRA national event title and he did it at his home track. Beach, in his ’68 Barracuda, used an 11.00 elapsed time to win the final round over the ’00 Firebird of Leonard Mattingly. Beach had lost in the first round in three of his previous four appearances this season.

In winning the Super Comp title, Zynda, of Clinton Township, Mich., cooled off the hottest driver in the class, Jack Sepanek, who was the winner of last weekend’s event in Charlotte.  Zynda crossed the finish line first by a slight 8.92 to 8.95 margin. Despite the loss, Sepanek was able to score enough points to earn a top ten ranking in the Super Comp category.

Cook, a former winner of the JEGS Allstars event in Joliet, Ill., claimed his first-ever national event win by driving his ’99 Corvette to a 9.92 win over the ’63 Corvette of past world champion Ray Connolly in the Super Gas final. Connolly, who won back-to-back national events in Joliet and Norwalk earlier this season, remains in contention for a second championship.

Super Street champion Durenberger of Starbuck, Minn., is best known for his success in the NHRA Sportsman Motorcycle series but he’s adapted quickly to four-wheel racing as he drove his ’68 Camaro to a 10.89 to 10.88 double breakout win over George Maxson.

In the Spitzer Race Cars Top Dragster class Johnson of Cynthiana, Ky., claimed the first national event title of his career following a 6.20 to 6.78 win over B.J. Sexton in the final. The Sexton family found a reason to celebrate as B.J.’s father, Jeff, claimed the win in the Brodix/Steve Schmidt Racing Top Sportsman class. Sexton, a past national event winner in Super Stock, drove his ’03 Cavalier to a 7.01 for the win over Jerry Albert’s 7.14. Albert was looking for his third-straight win at National Trail Raceway having won this event last year and the Lucas Oil divisional earlier this year.

All of the champions from the JEGS Northern SPORTSnationals and the winners crowned earlier this year at the JEGS Cajun SPORTSnationals in Belle Rose, La., will now be eligible to win the coveted JEGS Crown trophy which goes to any driver who can win two of the three JEGS SPORTSnationals events in a single season. The third and final event will be the JEGS Pacific SPORTSnationals, scheduled for Oct. 11-13 at The Strip at Las Vegas Motor Speedway.