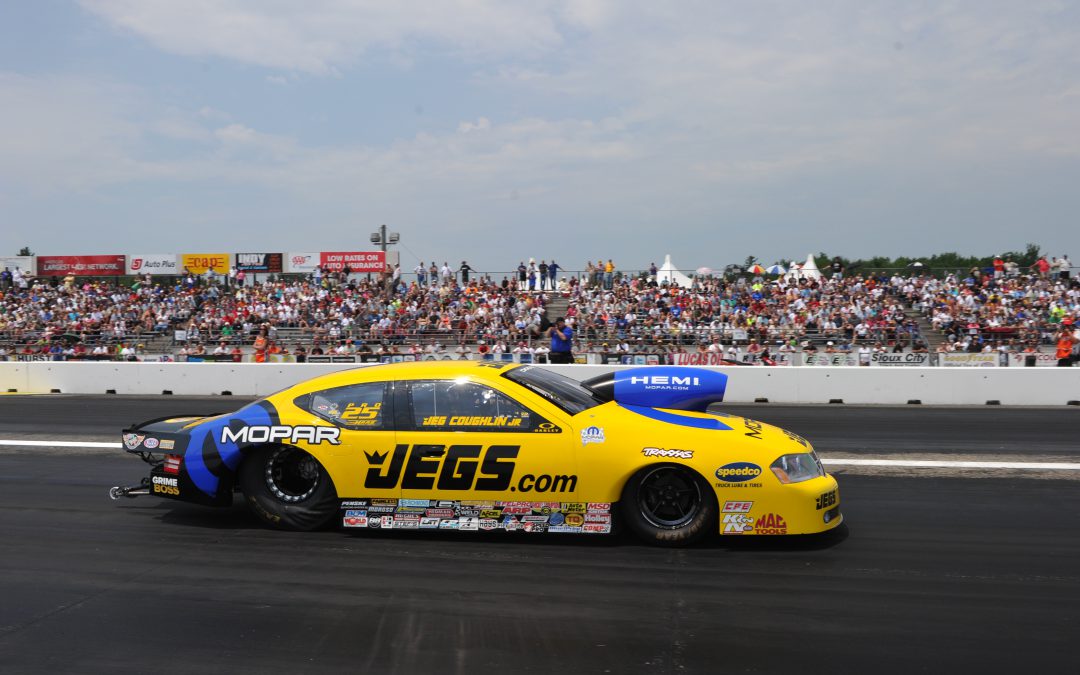 "It's not the way I dreamed of celebrating my birthday," said Coughlin who turned 43 on Sunday. "But, we went some rounds and earned some points, so it wasn't all bad. I'm just hungry for another win."

As the top qualifier, Coughlin had a first-round bye before beating Vincent Nobile in the second round. He fell to eventual runner-up Shane Gray in the semis.

Sunday was the hottest day of the entire weekend and Coughlin said the team did their best to try and anticipate what the conditions would be like.

"We had a good showing car through qualifying," Coughlin said. "We knew it was going to be hotter today, so we tried one little thing in Q4 to try and get us ready for the hotter conditions. We didn't think the car liked it too well, so we backed off that direction."

Coughlin said the JEGS.com Dodge was a little bit of a handful once race day started.

"The first round run was really good, it just got left of the grove, into the marbles and scrubbed off a ton of ET," he said. "We were lucky we were on a single. However, I felt like if we could poke this thing down the middle, we'd be ok."

In the second round, Coughlin once again had to do some nifty driving to put Nobile on the truck.

"When I let the clutch out it immediately took the tires off," Coughlin said. "I pulled into second gear as quick as I could and babied it through the hard spot."

"We made some adjustments, as we normally would going into a semifinals," Coughlin said. "We changed the weight transfer and what-not. It just didn't come to life like we wanted it to.

"I let the clutch out and it lost the tire again, then I saw Shane motoring away."

"The sad part about it is that we had a solid car throughout the weekend," Coughlin said. "We were still good today, but not up to par to win the race. I was driving really well and was happy with that.

"We'll lick our wounds and head on to Chicago next week."

Up next for Coughlin and the JEGS.com/Mopar Dodge Avenger team is the June 27-30 Route 66 NHRA Nationals at Route 66 Raceway outside Chicago.