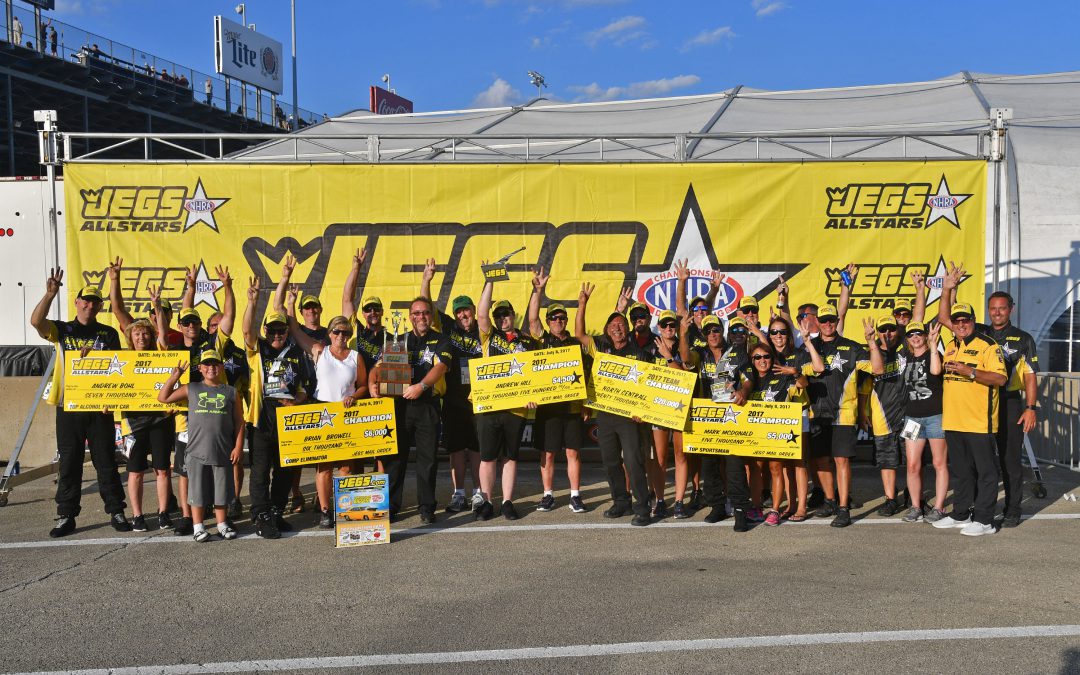 The Division 3 crew won the elite competition for the eighth time following individual wins by Brian Browell in Comp Eliminator, Andrew Hill in Stock and Mark McDonald in Top Sportsman. The final tally had Division 3 with 900 points and the teams from Division 7, Division 5 and Division 6 tied for second with 700 points.

The JEGS Allstars is a unique competition that features 80 of the best Sportsman racers from the NHRA Lucas Oil Drag Racing Series. Racers qualify for the event by earning points in their home division during the previous year. Champions are crowned in 10 different classes and there also is an overall team champion.

The Regional portion of the show, which features racers in Top Alcohol Dragster and Top Alcohol Funny Car, was effectively decided in the first round in favor of the Western Region, which featured Severance. The West finished with 700 points to 500 for the North Central region and 100 each for the Central and East regions.

Severance, the winner of the last two national championships, defeated Mia Tedesco in the Top Alcohol Dragster final, 5.258 to 5.342. In Top Alcohol Funny Car, Bohl drove around Chris Marshall with an impressive 5.553 run.

Browell overcame a slow start in the Comp final against Division 6 racer Brian Hyerstay and drove around his opponent with a 7.136 in his D/Dragster. In Super Stock, Division 1 racer Antonette used a perfect reaction time to stop Division 3's Jeff Dona and in Stock, Hill chipped in with 300 points when he stopped Division 7 racer Tibor Kadar in a double-breakout contest.

Folk, the reigning NHRA Super Comp champ, continued his recent hot streak with a near-perfect 8.904 run in the final to beat Trevor Larson, who was the blocker based on his win in last year's JEGS Allstars event. Folk won both the Super Comp and Super Stock titles two weeks ago in Norwalk.

The Division 7 team picked up their lone victory after Mostowich got past Dave Kelly in the final. Mostowich was able to coast to the final after Kelly shutoff early. Dalrymple got the best of Division 2 racer Jonathan Anderson in the Super Street final, 10.886 to 10.886. The difference was Dalrymple's .002 reaction time.

The overall win was decided when McDonald drove to the Top Sportsman title over blocker J.J. Heber and Furr scored in the Top Dragster class for the Division 2 team after opponent Phil Unruh red-lighted in the final.

Each member of the Division 3 team shared in a $20,000 bonus provided by JEGS Mail Order. If any of the champions from today's event can duplicate that feat in the final round of tomorrow's Fallen Patriots NHRA Route 66 Nationals, they will earn a double-up bonus from JEGS.