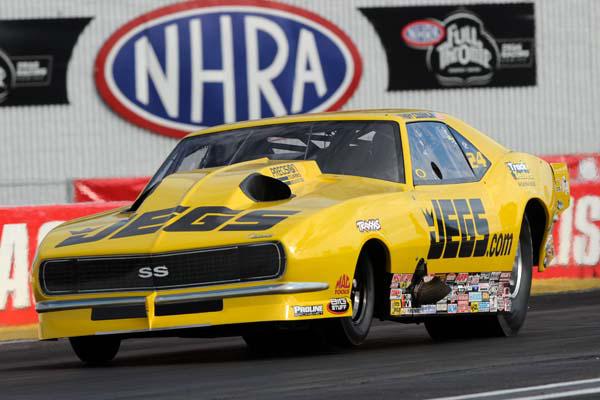 CHARLOTTE (Sept. 11) — With three races left in the NHRA Pro Mod Series presented by ProCare Rx, third-ranked driver Troy Coughlin finds himself just three rounds out of first place. In the last three races, the past world champion has posted two runner-up results and a semifinal finish, making him one of the hottest drivers on tour as the NHRA circuit arrives at zMax Dragway.

"We jumped up to third at the Indy race last Sunday and that's exciting," Coughlin said. "We just need to keep going a round or two further than the other top guys and it will get really interesting for us."
Coughlin, the 2009 Pro Street champion in the National Muscle Car Association, has successfully qualified for the seven races contested so far this season and has gone rounds at the last five national events. His JEGS.com twin-turbo entry has proven to be one of the quickest at every race.

"We have a competitive racecar," Coughlin said. "Steve Petty (crew chief) and the guys have this thing working so well. If we continue to limit our mistakes then the sky's the limit.

"It's an exciting time for us. We haven't been this deep into a championship chase with a legit chance to win it all since 2009 in the NMCA so the juices are definitely flowing."

The final three Pro Mod races take place in Charlotte, St. Louis and Las Vegas, which happen to be three of Coughlin's favorite tracks, another factor that has him excited about the stretch run.

"Of course Charlotte and Vegas are Bruton (Smith) tracks so you already know they're top-notch. St. Louis should be really good if the weather is nice and cool because it's at sea-level and the cars can really fly there. I couldn't ask for a better group of racetracks to battle for the championship.

"I have really taken to the Charlotte track and the city itself. The race fans are so knowledgeable and they support the Pro Mod class well. I'm looking for a big weekend. Maybe it's our turn to win one of these things. Then we'd know for sure we did better than everyone else."

Qualifying sessions for the NHRA Pro Mod Series presented by ProCare Rx will take place at 2 and 5 p.m., Friday, and 2 p.m. Saturday. The first round of eliminations begins at 4:30 p.m., Saturday, and continue Sunday at 1:30 p.m.