Championship Lead Extended After Hard-Fought Battle at the “Big O” 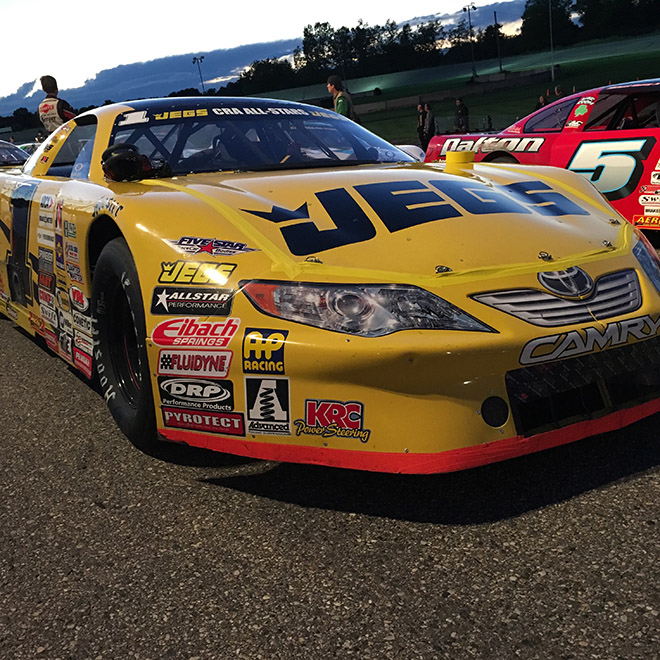 One of Elton John’s biggest hits was a song called “Saturday Night’s Alright for Fighting.”  That could have been the mantra for Cody Coughlin on Saturday night as he fought hard despite mechanical issues to score a top 10 finish in the JEGS/CRA All-Stars Tour 100-lap feature at Michigan’s Owosso Speedway.

Coughlin started second and led close to 50 laps, but in the second half of the race he had to deal with an engine that was down on power and a broken front spring.

Even while other cars may have been faster than Coughlin in the closing laps, he was able to bring his number-1 JEGS.com Toyota Camry to a seventh-place finish.  The top-10 run also increased his points lead as his nearest competitors in the standings all finished behind him.

“It wasn’t the day that we wanted, but we all fought hard all day long,” Coughlin said.  “The car didn’t handle right in practice, so my guys worked hard to get it better.  We eventually did get it better, but it’s hard to compensate for two parts failures.  I’m disappointed, but it was still a decent night considering.”

Coughlin’s quest for Champion Racing Association history now has just four total races remaining.  Two races are left for each CRA division, and Coughlin leads the points in both divisions.

The next CRA race day for the 20-year-old driver will be on September 25 at the Lucas Oil Raceway in Brownsburg, Indiana.  It will be a double-header for the JEGS/CRA All-Stars Tour and the ARCA/CRA Super Series.

“I’m really looking forward to going back to Lucas Oil Raceway,” Coughlin said.  “It’s always a fun track to race at, and I know that my guys will give me a great car there.

“I’m very thankful for the hard work from my guys today, even though we didn’t get the finish that we wanted.  My crew chief (Jack Smith) did a great job all day, as did Kevin (Hamlin, team manager), Scott (Wimmer, spotter) and Dave (Holt, crew member).  God has blessed me with a lot of great people on my team, including my parents (Di and John).  Even though my mom and my sister (Kennedi) couldn’t be at the track today they were still cheering me on.”