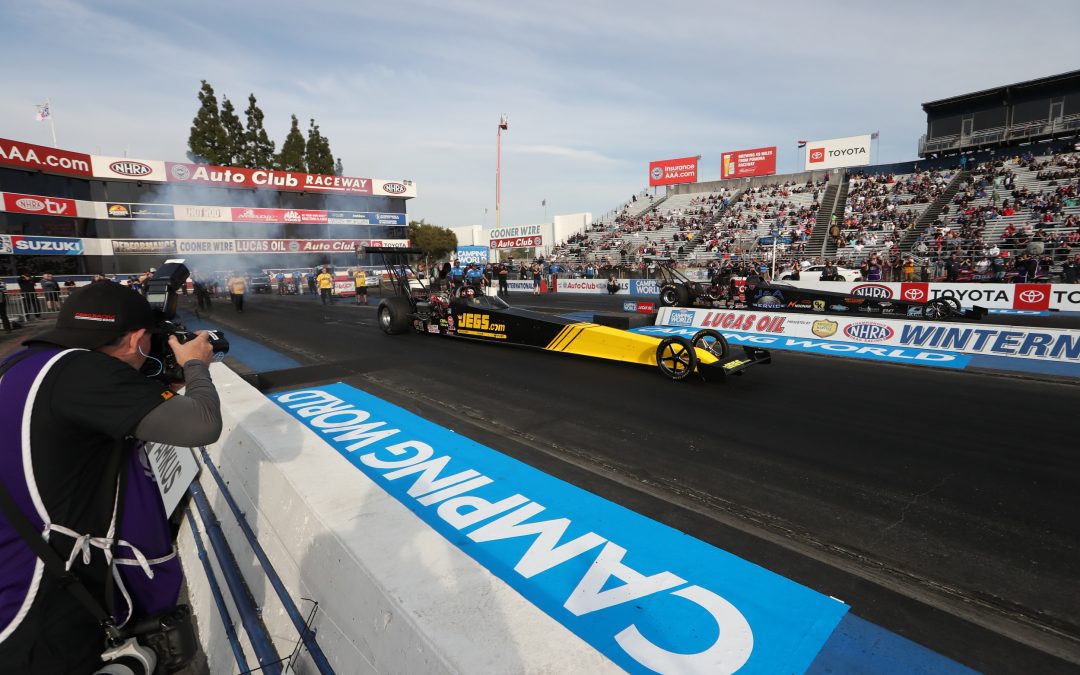 GAINESVILLE, Fla. (March 2) — Fresh off a huge win at the season-opening NHRA Winternationals in Southern California, Mike Coughlin arrives at this weekend’s “Baby Gators” at Gainesville Raceway as the No. 1-ranked driver in Top Alcohol Dragster.

In just his second race in the category, Coughlin beat-down the West Coast heavies in his nitro-injected JEGS.com McPhillips Racing dragster. Now the three-time Division 3 champion hopes to repeat the feat on the opposite side of the country and there’s no reason to think he can’t make it happen. 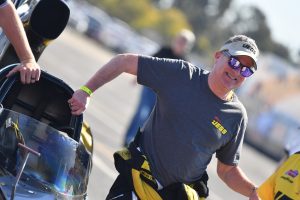 Mike Coughlin is all smiles after winning the NHRA season opener in Pomona, CA.

“I looked at the standings the other day and there we were in the top spot, so I called Rich (McPhillips, car owner) and said, ‘Hey, I sure like the look of this,'” Coughlin said with a chuckle. “And he said, ‘Well, let’s try to keep it that way,’ so that’s exactly what we’re hoping to do.

“The team is just so good. They actually went to a regional event in Belle Rose (Louisiana) last weekend and won that race also with Matt Cummings in the driver’s seat so they’re a perfect two-for-two so far. I’d love nothing more than to make it three in a row.”

A past Division 3 champion in Top Sportsman (2007 and 2009) and Top Dragster (2019), Coughlin will be sharing the McPhillips dragster with Cummings throughout the 2022 season as both men look to make a mark in their own divisions as well as in the race for the national title. The group will make more defined championship decisions as the season progresses. 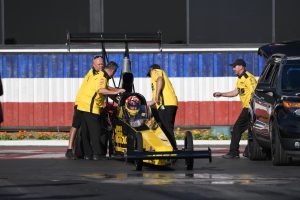 Led by Rich McPhillips and his son Rich Jr., Pennsylvania-based McPhillips Racing is the same group that helped Coughlin’s nephew, Troy Coughlin Jr., win back-to-back regional TAD championships in 2018 and 2019. During his time with McPhillips Racing, Troy Jr. won 10 races, three at the national level and seven more at divisional events. The Baby Gators are considered a Regional event.

“Rich and Rich Jr., Duke Roney, Don Nolan, Darrell McComas and Tony Collier, they’re as professional as any team in the sport, regardless of what class you want to talk about,” Mike said. “They have a real knack for setting the car up for the varying conditions they encounter and the car is so well put together it responds just as it’s supposed to every time.

“Pomona was a typical race for them. We started really well in the first round of qualifying and then they just pick at it and make it better each round. Next thing you know, they’re handing you the trophy.

“Probably the least reliable thing right now is the driver. I’m still very new at this and I’m definitely learning something new every pass. It’s been an adjustment to go from a Top Dragster that goes 230 mph in the quarter-mile to a car that hits that number by half-track. The first few times I made a full pass I was like, ‘Whoa, do I really want to do this?’ But, of course, you fall in love with the speed just as fast.” 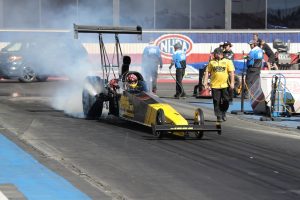 The McPhillips Racing dragster is two for two on wins so far in 2022.