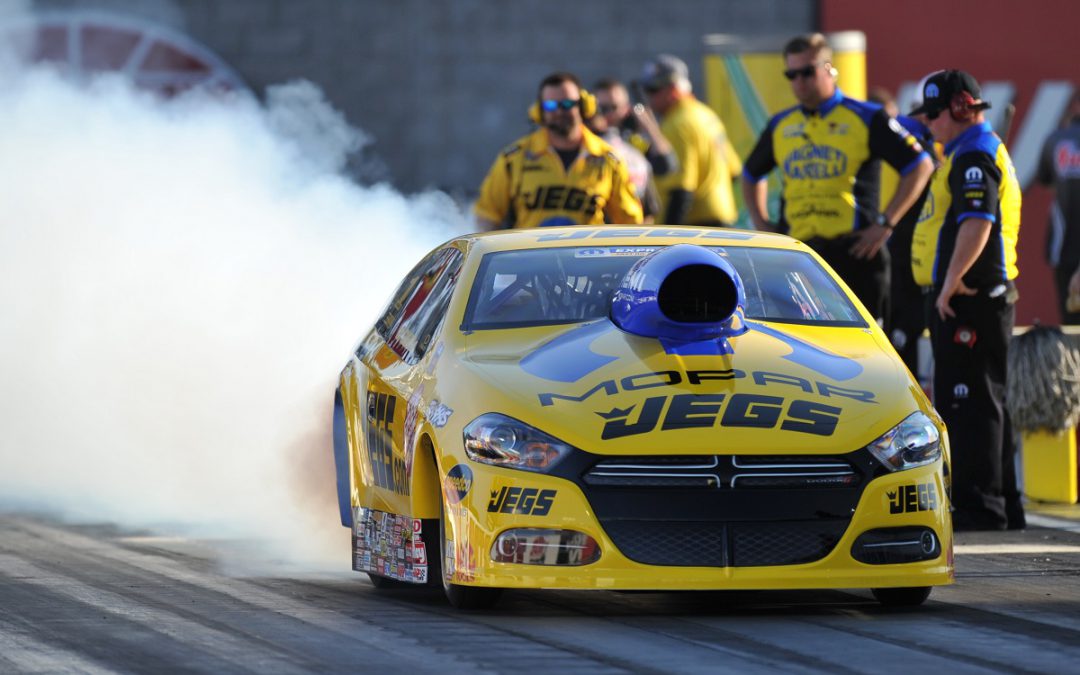 CHARLOTTE (April 7) — Reigning Pro Stock champion Jeg Coughlin Jr. was having dinner with his wife Samantha and son Jeg III a few nights ago when the trio raised their glasses and made a toast. "We decided our season starts in Charlotte, and we toasted that over dinner," Coughlin said.

This weekend's 4-Wide NHRA Nationals at zMax Dragway actually is the fifth drag race of the year, but the 56-time national event winner admits he hasn't had the best of starts in his JEGS.com/Mopar Dodge Dart, something he hopes to remedy in Charlotte.

"You can't hit the rewind button," he said. "You gotta go forward. The start we've had doesn’t feel good, but at the same time I know we've got an awesome team, a great car and loads of horsepower. I'm not upset by any means. I'm excited actually. The 4-Wide Nationals is the perfect place to get it all together."

Coming off a top qualifying effort in Las Vegas, Coughlin obviously has a very quick race car. In fact, when the team switched to the new Dodge Dart two races ago in Florida, Coughlin immediately went out and reset his career-best elapsed time and top speed to 6.484 at 214.62 mph.

"We had a great run going in Gainesville (Fla.) but lost by just a few thousandths of a second in Round 2," he said. "We almost got away with one that round and if we had, who knows how the day would have ended.

"In Vegas, we had the quickest car of the meet but once again we lost a couple of close races (one in the K&N Horsepower Challenge and one in the regular national event) by just fractions of a second, both times on holeshots, which is pretty rare for us. We know what to do to turn on more win lights so we just need to get to work."

Usually it's Coughlin grabbing holeshot wins. Of his 536 career round victories, 91 have come via a starting-line holeshot, the most of any pro driver in history.

"I'm ready to swing it back our way this weekend," Coughlin said. "Bruton Smith's track in Charlotte is one of my favorites. He always has a top-notch staff, perfect grounds and lots of fans coming through the gates so it's a place where you want to perform well. Plus, we get a lot of our NASCAR friends coming by for visits, from the engineers and engine builders on to the crew guys and even some drivers, it's cool to see them come out and support what we're doing."

Qualifying rounds for the 4-Wide Nationals are set for 1:15 and 4:15 p.m., on both Friday and Saturday. Final eliminations, which will be broadcast in tape delay on ESPN2, will begin at noon, Sunday.