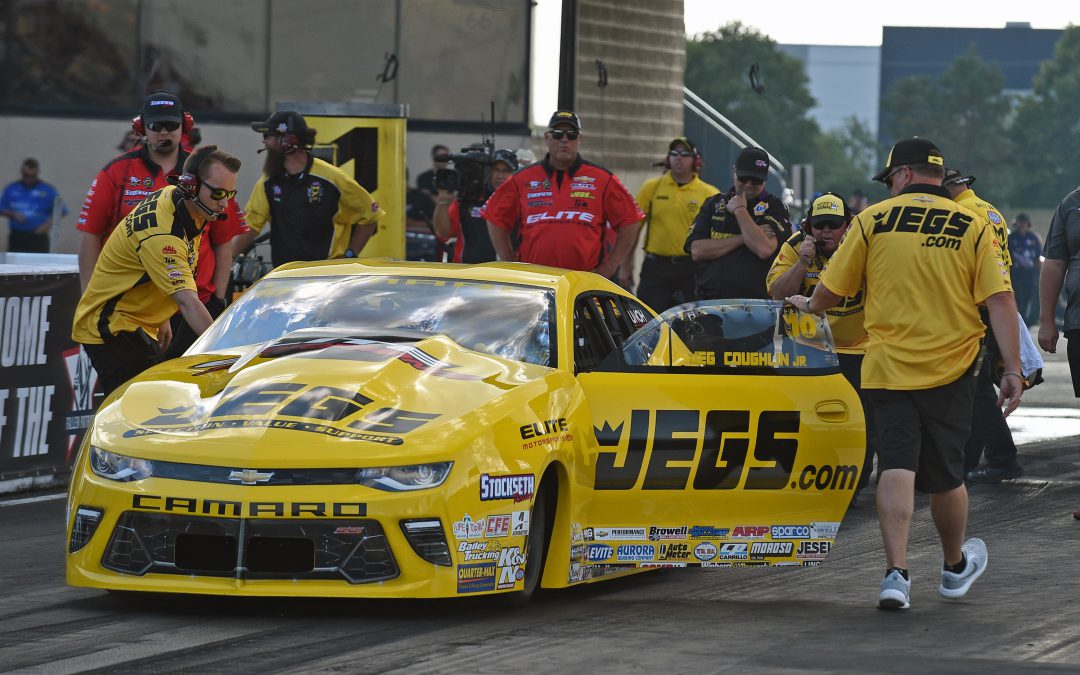 CHICAGO (July 8) — Jeg Coughlin Jr. already holds the distinction of being the most decorated Pro Stock driver in Route 66 history with five victories at the 20-year-old facility. Now the six-time world champion wishes to pad his lead in that category with another big win at this weekend's 20th annual Fallen Patriots NHRA Route 66 Nationals.

"I'm looking forward to race day tomorrow," Coughlin said. "It's time to put our game face on and get after it. We know what we need to do to go rounds and with the success we've had here in the past, Chicago would be a perfect place to score another Wally."

Finishing qualifying with a flourish, Coughlin used the last time trial to jump from seventh to fourth overall, covering the quarter-mile in 6.584 seconds at 210.18 mph.

"We made a lot of changes on the car from Friday to Saturday and it seemed to like it so that's exciting," Coughlin said. "From behind the wheel I could feel the car working and accelerating well when we ran earlier today. We knew it would be a tick cooler in the last session and we certainly wanted to improve. In the end we picked up a couple of hundredths and moved clear up to the No. 4 position so we feel really good."

In Sunday's first round of eliminations, Coughlin will enjoy a decided performance advantage over Kenny Delco, who qualified 13th on the grid with a 6.662 at 208.01 mph.

Saturday was very busy for the 76-time national event winner as he split his time between driving the JEGS.com/Elite Performance Chevrolet Camaro and presiding over the JEGS Allstars, which pits the top 80 Sportsman drivers from the NHRA's seven geographic areas against one another for team and individual glory. The race is considered the premiere Sportsman event of the year.

"The JEGS Allstars was a home run today," Coughlin said. "The weather was beautiful. Division 3, my home division, won it all, not that I'm biased. The racing was everything you would think with the best of the best out there racing. That was fun and it was great to hear we were on FOX Sports 1 with final-round coverage. That was special to all of the teams and drivers and it was great to see the exposure for the JEGS Allstars.

"I'm a Sportsman racer at heart so this weekend always is very neat for me because I know how hard it is to qualify for the Allstars. It's such an accomplishment. I really enjoyed watching the racing today. Unfortunately, there is just one champion per class because there was some great racing going on out there. My congratulations to all the competitors."

The first round of Pro Stock eliminations begin at 1 p.m., Sunday. FOX Sports 1 will air live coverage from 3-6 p.m., Sunday. Times are local and subject to change.