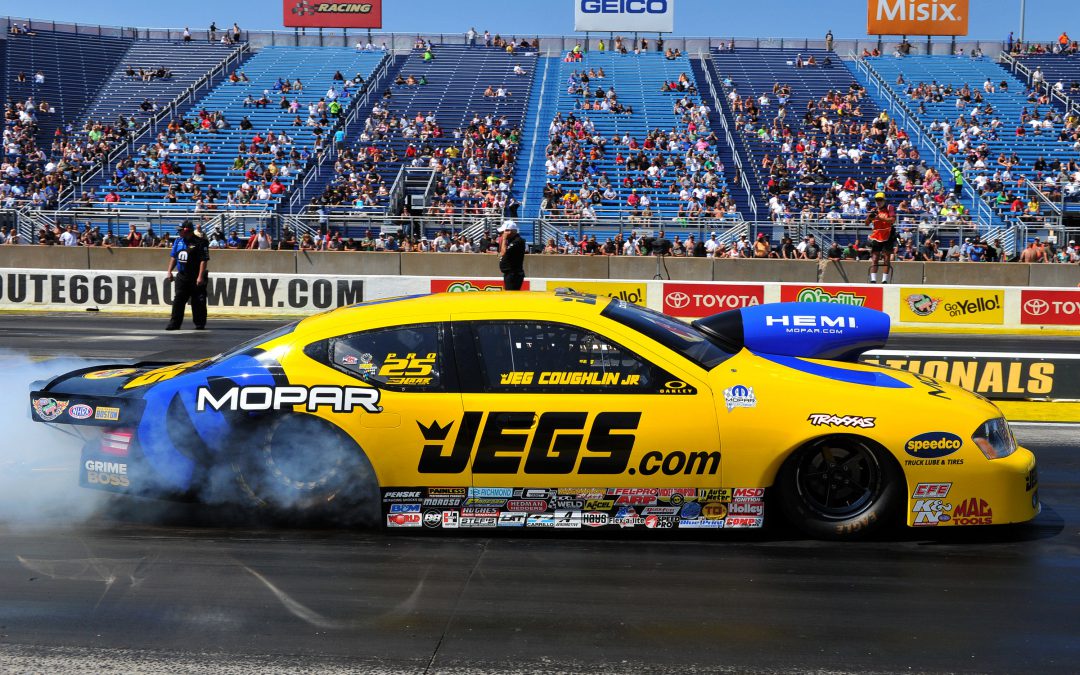 "What an unbelievable day!" Coughlin said. "The guys had this JEGS.com/Mopar Dodge Avenger in top form and let me tell you what, we needed it to be. You look at the guys we had to race and there were certainly no easy rounds. I feel very fortunate to be standing here clutching this Wally (trophy). I love Chicago!"

After qualifying an impressive third on the elimination grid, the 43-year-old from Delaware, Ohio, had to run a gauntlet of top pros to score this win. He opened against Bristol winner Rodger Brogdon, then raced two-time world champion Jason Line, teammate and defending series champion Allen Johnson and finally four-time titlist Greg Anderson.

"We've been running well, really all year, but we've had our little bugaboos like every team," Coughlin said. "We did try some new things this weekend and I think it's safe to say we made some ground on the total package we're putting out there. My thanks to Mark Ingersoll, Jim Yates and the rest of the J&J Racing crew for staying after it and working their tails off to give Allen and I these great racecars.

"This was a very big weekend for us because the JEGS Allstars race was also going on, so to win at the same event as that deal makes it much more special. Some pretty darn good drag racers have visited the Route 66 winner's circle this weekend and I'm honored to be alongside of them all.

"The JEGS Allstars takes so much planning and a lot of my mental time was spent making sure it was going well. Certainly all my free time was used up watching those guys and gals get after it. I'm thrilled to say it went off without a hitch and when I was able to turn 100-percent of my focus to my racing, that fell into place also."

Chicago's magic lifted Coughlin to second in the points, just ahead of Johnson. He also made up a couple of rounds on leader Mike Edwards.

"From my first time here I knew this was a special place," Coughlin said. "We are close so lots of friends and family can come join us, and Chicago is a great market for our business so we have lots of customers stopping by to say hello.

"It's cool that we debuted our new free shipping and handling on all orders deal this weekend and turned right around and took the car to the winner's circle. Everyone's a winner."

Coughlin won't have long to savor his second win of the year as the tour races over to Norwalk, Ohio, for next weekend's national event, which begins Friday.