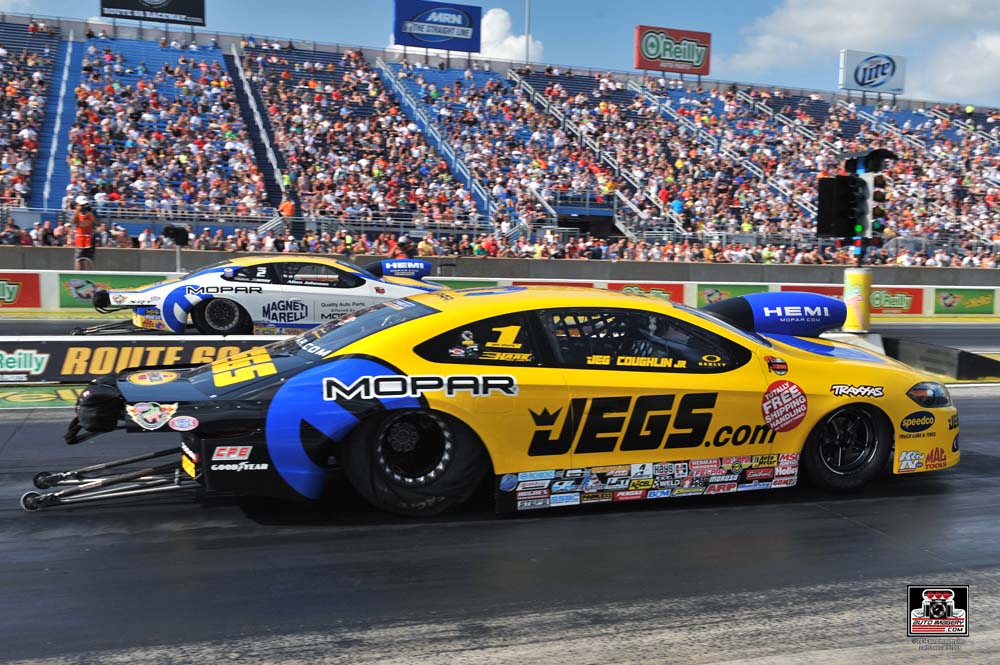 CHICAGO (June 28) — The most successful drag racer in Route 66 Raceway history, six-time world champion Jeg Coughlin Jr., will try for his sixth Chicago title from the third position on the ladder after carding a speedy 6.604-second pass at 209.30 mph during qualifying for this weekend's NHRA event.

"I didn't even realize we had more wins here than anyone else until just before the race when the PR guys told me," Coughlin said. "I don't really think about stuff like that, but when it's brought up it is pretty neat to think about. I certainly love this track; always have, since the day it opened, and we'd love to add to the tally.

"We've put one of our team cars (Allen Johnson's Magneti Marelli Dodge Dart) on the pole and we're No. 3, so I'd have to say we're pretty pleased. Hopefully, Allen and I can race through the ladder tomorrow and meet each other in the final round. That's always the plan and so far it's set up that way with us being on opposite sides of the ladder. We'll see how it goes; one round at a time."

Coughlin and his JEGS.com/Mopar Dodge Dart have a full head of steam heading into eliminations. In the last six events he has advanced from ninth to second place in the world rankings on the strength of two victories, one runner-up result, and two semifinal runs.

"The guys worked hard since last weekend," Coughlin said. "We had a part break and it cost us in Epping (N.H.), but that's really the only bugaboo we've had in the last few months.

"It definitely feels like we're back on track. We opened with a 6.620, ran the 6.604 last night, then 6.619 and a 6.628 today with a lot more humidity to deal with, so the car has been near perfect. Alan Hornberger and Mark Ingersoll have these things tuned up just right and we're excited to see what tomorrow brings."

To add to his Chicago tally, Coughlin needs to get past first-round opponent Larry Morgan, who qualified 14th with a 6.695 at 207.27 mph. The two veteran racers have not met in eliminations this year.

"Aside from how we qualified, today was a huge success with the annual running of the JEGS Allstars," Coughlin said of the battle of the best Sportsman stars in the sport. "Our congratulations to Division 5 for bringing home the team victory and for all the individual winners. Scott Woodruff and Meghan (Coughlin) pulled off another stellar event, and all of us at JEGS are very proud to support this wonderful race each year."

Race fans will be able to catch the majority of this event live beginning at 2 p.m. CT on ESPN2.