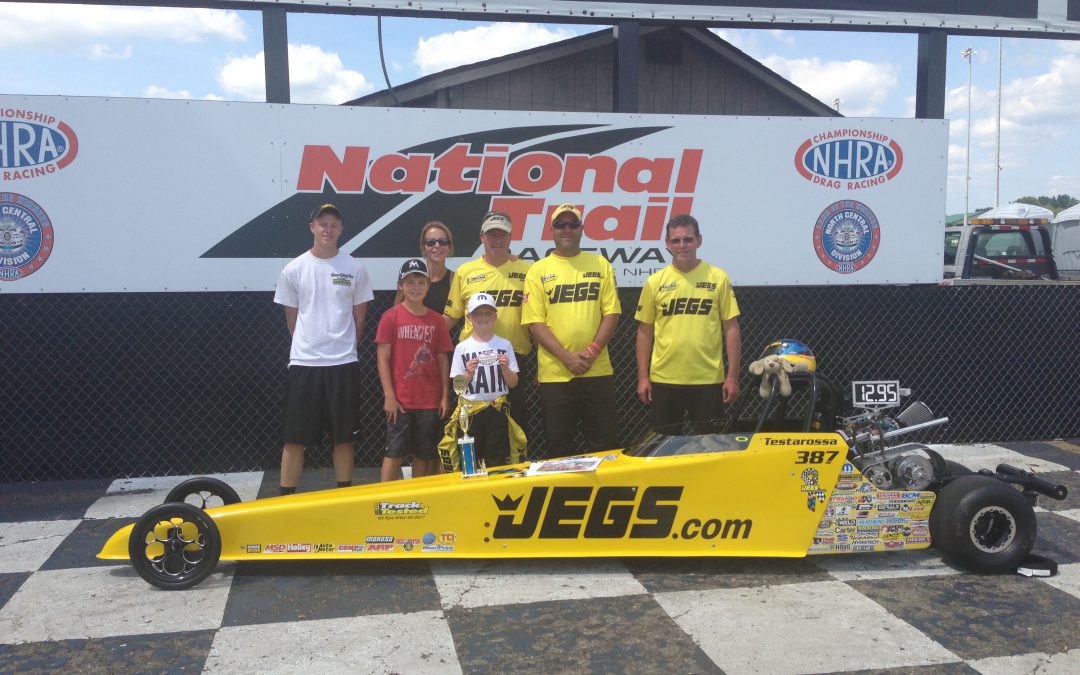 HEBRON, Ohio (Aug. 27) — Third-generation drag racer Clay Coughlin scored his third victory of the season Sunday at National Trail Raceway to move into sole possession of first place in the Jr. 1 bracket at the historic facility in the suburbs of Columbus, Ohio.

Coughlin, the 9-year-old son of multi-time drag racing champion Mike Coughlin, managed to break out of a tie at the top of the rankings with good friend Caleb Burns by beating him in the final round of the 12.90-second bracket. He now has a one-round margin with two events left on the 2013 schedule.

"It was quite a weekend," said his father Mike, one of four sons of JEGS founder Jeg Coughlin Sr. who now own and run the high performance parts mail order facility in Delaware, Ohio. "Clay's been a battle with a handful of kids all season and was tied with Caleb at the start of the race.

"Both boys lost in the first round Saturday so they stayed tied, and then they ended up on opposite sides of the ladder Sunday and raced right through to the finals. Clay got the win and has a one-round cushion in the points but it certainly looks like it's going to go right down to the wire.

"The main thing is they are all having a blast. There were more kids in our trailer this weekend than I could count and they were all smiling and having fun."

Mike helps work on Clay's JEGS.com-branded dragster but was quick to point out that the team's success can largely be attributed to crewmen and friends Greg Cody, Tom Stilwell, Jim Daddus and Matt Flowers.

"Everyone contributes and believe me we need the input," Mike said. "These little 12.90 cars are a lot of fun to run but they also keep you on your toes. There are so many variables. Even the amount of traction compound they put down can change your elapsed time. It's stressful. Now I know how my dad felt, only he had four of us to worry about."

By winning Sunday, Clay qualified for the Race of Champions, which will take place during the NHRA Division 3 Jr. Dragster Championship, Sept. 6-8, at Kil-kare Dragway in Xenia, Ohio.