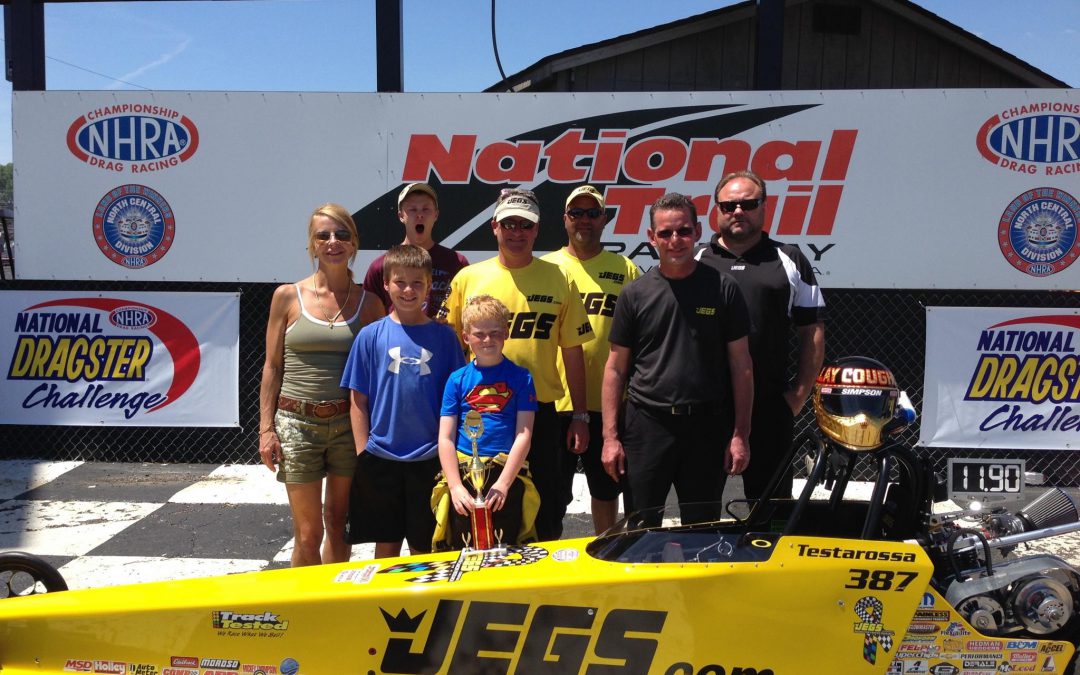 HEBRON, Ohio (May 28) — A double-header weekend of drag racing at National Trail Raceway produced a victory and a semifinal result for defending track champion Clay Coughlin. The strong showing lifted the third-generation driver to second place in the early rankings.

Contesting the Junior Dragster 1 class for 8-9 year old competitors, Coughlin earned the No. 1 qualifier position in Saturday's race with a class-leading .015-second reaction time. He parlayed that start into a respectable semifinal finish.

Returning Sunday, Coughlin, who lives in nearby Delaware, Ohio, managed to survive all four rounds of eliminations to take the trophy over Jesse Cochran of Mount Vernon, Ohio. It was an impressive race as Coughlin had to catch and pass Cochran going down the strip, posting a 12.106-second pass on his 11.90 dial-in to win over the 14.228-second run on a 13.15 dial-in carded by Cochran. Blaine Bazell, who won Saturday's race, is now just 10 points ahead of Coughlin.

"Clay's doing a great job and his focus this weekend was the difference," said father Mike Coughlin, a two-time Top Sportsman champion in Division 3. "Now that summer is here we'll be racing a bunch more and he'll only get better. The kids love this time of the year.

"Special thanks to Greg Cody, Rick Rossiter, Tom Stilwell and Matt Flowers for their help over the weekend. They treat Clay and Jack like family and Kriss and I always know they are looking out for their safety. And obviously they give us great racecars to run."

Clay's older brother Jack dusted off his helmet as well over the weekend, running Sunday's race in a 7.90-second dragster, the quickest and fastest cars in Junior ranks designed for the older kids.

"This was the first time Jack drove the quicker car and I think it really got his attention," Mike said. "Going 81 mph would get any kid excited, let alone one that's still a ways off from getting a real driver's license.

"He went up against a kid in Round 1 that put a .009 package against him (calculating reaction time and index) and that was a little too much for him to overcome. Still, I think he had fun and although he loves his golf, which is great, I'd imagine he'll want to race some more this summer."

Racing resumes this weekend with another points meet at National Trail Raceway.