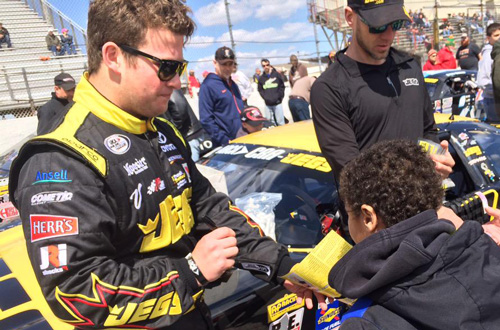 Cody Coughlin will be competing in the ARCA/CRA Super Series powered by JEGS Madison County Community Health Center 125 this Sunday afternoon at Anderson Speedway in Anderson, Indiana.  Here are some pre-race notes leading up to this event.

Cody Coughlin finished eighth in the ARCA/CRA Super Series powered by JEGS season opener at Toledo Speedway in Toledo, Ohio.   After the race, he was treated for a scratched cornea in his eye.  Coughlin said he is back to 100% and is ready to go for this weekend’s second ARCA/CRA Super Series 125-lap race at Anderson Speedway in Anderson, Indiana.

Back to Where his Super Late Model Career Started

The Joe Gibbs Racing Development driver made his first career Super Late Model start at Anderson Speedway on July 20, 2013 in the Redbud 300.  He had a top-ten run going until he got caught up in an accident on lap 69.  This Saturday’s race will be the second time he has competed in a Super Late Model at the quarter-mile, high-banked oval.  He has also competed in three JEGS/CRA All-Stars Tour events at Anderson Speedway.  He has one top-five and two top-ten finishes in his previous races.

Back in the ARCA Seat at Talladega

Cody Coughlin will strap back in his No. 55 JEGS.com Toyota Camry on Friday, May 1st to compete in the ARCA Racing Series International Motorsports Hall of Fame 200 at Talladega Superspeedway.  This will be his second start of 2015 in the ARCA Racing Series.  He finished an impressive fourth at the season opener at Daytona International Speedway after leading many laps in his superspeedway debut.

One of Cody Coughlin’s hobbies is the game of golf.  It wouldn’t be a surprise if you periodically see him playing a round at the famous Muirfield Village Golf Club in nearby Dublin, Ohio.  When asked which golf course is on his bucket list, he quickly answered Augusta National Golf Club in Augusta, Georgia, home of the “Masters” golf tournament.