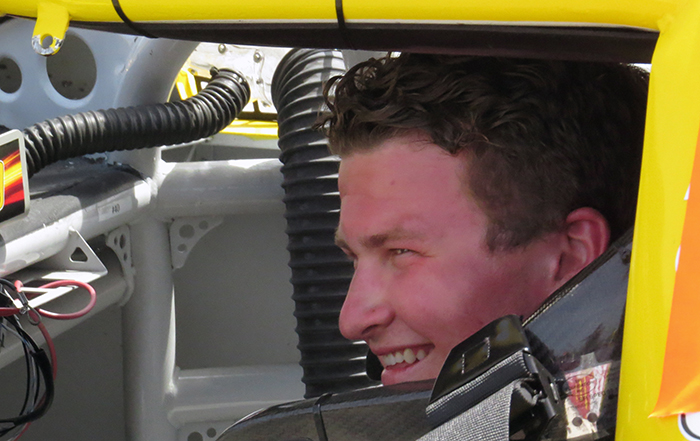 Fresh off of his first career ARCA Racing Series top-10 finish at Salem Speedway, 18-year-old Joe Gibbs Racing Development driver Cody Coughlin is eager to make his third career ARCA start on Sunday, May 17 during the Menards 200 at Toledo Speedway in his home state of Ohio.

“I’m very anxious to get back into my JEGS.com Toyota this weekend at Toledo,” said Coughlin, of Delaware, Ohio.  “After showing a lot of speed throughout the last two race weekends, I believe we can put everything together in order to come away with a great finish on Sunday afternoon.”

Coughlin and his No. 55 JEGS.com team for Venturini Motorsports head into Toledo Speedway after a productive day of testing last Thursday.  The driver and his team were very pleased with the results from their day of testing.

“We went to Toledo last week and tested with my Venturini Motorsports teammates Justin Boston and JJ Haley,” said Coughlin.  "We had some good cars there to compare ourselves with and we were right there with all of them on the speed chart.  I am very pleased with how the test went.”

Prior to testing with Venturini Motorsports on Thursday in his ARCA Racing Series car, Coughlin also gained valuable knowledge racing his No. 1 JEGS.com Super Late Model in the ARCA/CRA Super Series Border Wars 7-Up 150 held at Toledo Speedway on April 12.  Coughlin believes the additional experience will help establish a solid baseline for this upcoming weekend’s event at Toledo.

“I know it was on a different tire and a different car, but I think I learned a lot about how the car may change throughout the weekend, as well as where the passing opportunities are on the racetrack,” said Coughlin.  “Both of those things I can apply this weekend when I go back there with my Venturini Motorsports team for the ARCA race.”

After two starts and a number of test sessions in his No. 55 JEGS.com Toyota, Coughlin feels as though he’s taken a big step by becoming a lot more comfortable in the car.  By becoming more acclimated in the car he believes that he will be able to relay better feedback to his team in order to put himself in a better position to secure a good finish on race day.

“I’ve learned a lot in my two previous ARCA starts,” Coughlin said.  “The biggest thing of all is my comfort factor.  I can get in the car now and feel at ease to go out there and cut a good lap like I do in my Late Model.  I feel more in tune with the car now and I am able to get up to speed faster.”

Coughlin credits the strong support from his family as one of the biggest factors in making him confident every time he straps into a race car.  “The support I receive from my family is such an important factor for me and my racing career.  I can’t thank my mom (Di), dad (John), and sister (Kennedi) enough for their support.  I'm extremely blessed to have them in my life, supporting me both on the track and off.”

Sunday’s race, which will be broadcasted live at 2pm ET on FOX Sports 1, will be the first nationally televised event for the 18-year-old Coughlin.  He looks forward to showcasing the JEGS.com Toyota to a large audience of viewers at home.

“I think that if you do well in any of the races, whether they are on TV or not, people hear about it,” said Coughlin.  “That part of it doesn’t really change for me, but the cool part will be being able to have our yellow and black JEGS.com Toyota out in front of a larger audience compared to the racing we’ve done in the past.

“I think everybody knows we haven’t been doing this ARCA thing for very long, but we’ve shown speed and great consistency at all of the races thus far.  I think that we’re going to be able to battle with the best and put on a good showing for the fans watching on FOX Sports 1.”

Coughlin will kick-off his weekend racing schedule at Toledo Speedway on Saturday with the first ARCA Racing Series practice for the Menards 200 scheduled for 11:45am ET.  Final practice will take place at 1pm and Pole Qualifying will begin at 3:30pm.

Fans will have the opportunity to meet Coughlin during an on-track autograph session that takes place from 12-1pm Sunday.  Shortly after, at 2pm ET, the green flag will wave for the Menards 200.