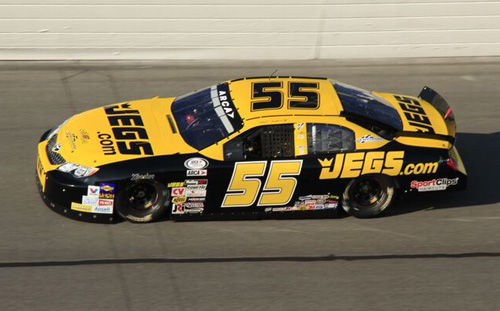 Cody Coughlin will be racing in the ARCA Racing Series International Motorsports Hall of Fame 200 this Friday, May 1st at Talladega Superspeedway in Alabama.  The race will air live at 5pm CT on FOX Sports 1.

The Joe Gibbs Racing Development driver is eager to step back in his No. 55 Sport Clips/JEGS.com Toyota Camry this Friday to compete in his first race at the famed Talladega Superspeedway in Alabama.  This will be his second start on a Superspeedway.  Back in February, he qualified second and finished fourth in the ARCA Racing Series season opener at Daytona International Speedway in Florida.

Cody Coughlin has an impressive record in ARCA Racing Series competition.  He is currently in his second season driving for Venturini Motorsports. In his 12 previous starts, he has four top-five finishes and nine top-ten finishes.  In his last three starts, he has finished fourth.  Those finishes came at Kentucky Speedway, Kansas Speedway and Daytona International Speedway.  At Daytona, he came up a bumper short of finishing third.  He also missed the pole by a mere 0.004 seconds.

Voices of Wisdom for Coughlin at Talladega

Not only will Cody Coughlin have the expertise of Crew Chief Dave Leiner and the Venturini Motorsports team at the 2.66-mile oval, he will also have two members of the Team JEGS crew with experience at Talladega.  Kevin Hamlin (Team JEGS Manager) has three win at Talladega with the late Dale Earnhardt in 1999-2000.  Scott Wimmer, Cody’s spotter, has six starts in the NASCAR Sprint Cup Series at the famed oval.

Mentoring a Student at his Alma Mater

Recently Cody Coughlin learned that a student named Adam, who attends his alma mater Worthington Christian Elementary School in Worthington, Ohio, was doing a report on the history of cars.  The Joe Gibbs Racing Development driver found out and invited Adam over to help him with his report.  Coughlin said he did a similar report like what Adam is doing when was in the fifth grade himself.  He said it was a fun experience helping him out and is waiting to hear what he got for a grade on the report.