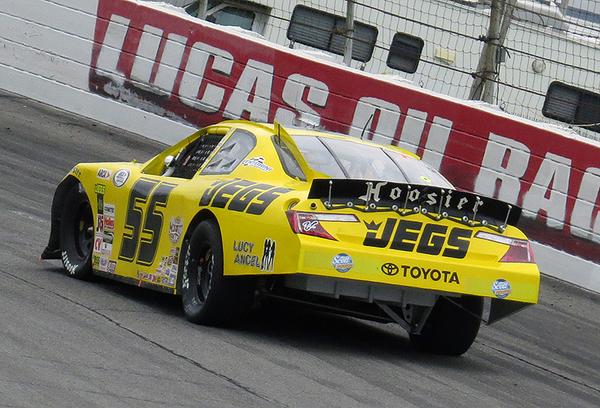 The driver is looking forward to his busy week behind the wheel of the No. 55 JEGS.com Toyota for Venturini Motorsports and No. 1 JEGS.com Super Late Model.  After figuring out the “Tricky Triangle” at Pocono and running within the top-five in his superspeedway debut, Coughlin is confident heading back to the track where he recorded a ninth-place finish in June.

“We ran pretty well there during our first trip to Pocono,” said Coughlin.  “We’ve made some great strides on the car since we were there in June and I believe we’ll be able to contend the same way we were able to at Chicagoland.

“The last time we were there (at Pocono), we got caught up on a late race restart and that kind of bobbled us up a bit.  I think if we just do everything we know how to do and can keep our nose clean, I think we’ll be in a good position at the end of the day.  We did it at Chicagoland at a place I had never seen before, so I’d like to think we’d be even better at a place I have seen and have experience racing at.”

This time around at Pocono Raceway, veteran ARCA Racing Series crew chief Dave Leiner will be calling the shots for the No. 55 team.  Thus far, Coughlin believes the addition of Leiner has brought a lot to the table and he looks at his first career top-five finish at Chicagoland Speedway (IL) as a good indication of the progress being made.

“Dave has brought a lot to the table,” Coughlin said.  “He’s done some things with the bodies and some other things that have made me more comfortable.  I have also changed seats, which has made me a lot more comfortable in the racecar.  With the amount of experience Dave has, as well as the experience I’m getting behind the wheel, I think we’re really starting to mesh and good things are happening.”

Following the conclusion of the ARCA Racing Series Modspace 125 on Friday night, Coughlin will hop in a plane and return to his home state of Ohio to race a Super Late Model in front of his hometown fans at Columbus Motor Speedway.

Coughlin recorded fast time in the lone practice session for the ARCA/CRA Super Series JEGS Bud St. Amant 174 on June 28 before rain showers postponed the event until this Saturday, August 2.

The race on Saturday will have a special meaning for Cody and the rest of the Coughlin family.  Gary St. Amant, the son of Bud St. Amant, served as Coughlin’s first driver coach, crew chief, and mentor. JEGS, a company owned and operated by the Coughlin family also sponsored both St. Amant’s during their racing careers.

With a fast car underneath him, and the support of his family and friends, the 18-year-old Coughlin is confident in his chances of winning the race in St. Amant’s memory.

“I’m really looking forward to returning back to Ohio on Saturday to race close to home,” Coughlin said.  “It’s always great when you can go out to a race track and race in front of your hometown fans.  Having this race held in memory of Bud St. Amant means a lot to my family.  We’re just going to go dig and try to win it.”

Throughout the busy weekend, Coughlin will have his family right by his side supporting him at both race tracks as he tries to win two races in two different states.

“I’m blessed to have a caring family that gives me their support as I progress with my racing career,” said Coughlin.  “I can’t thank my mom (Di), dad (John), and sister (Kennedi) enough for their support.”

Coughlin’s race weekend will begin on Thursday afternoon with the only ARCA Racing Series practice slated to start at 3pm ET.  Qualifying will take place at 12:35pm on Friday and the green flag is set to wave on the ARCA Racing Series Modspace 125 at 5:15pm.  Racing is scheduled to begin at 7pm on Saturday night at Columbus Motor Speedway.

Live coverage of all of this week’s ARCA Racing Series events and Saturday’s ARCA/CRA Super Series JEGS Bud St. Amant 174 can be found on Speed51.com.  The Modspace 125 will be televised live on FOX Sports 1 beginning at 5pm ET.