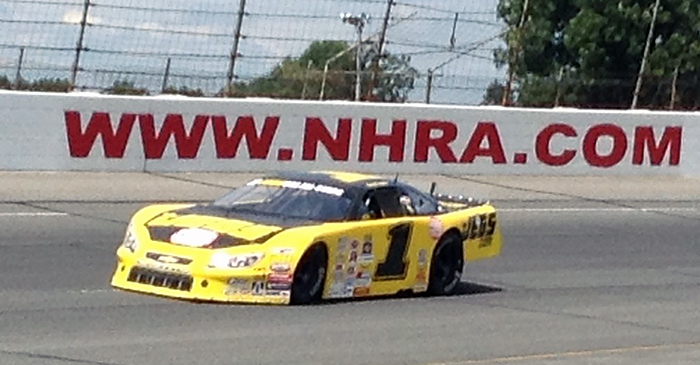 There is an old proverb, “When the going gets tough, the tough gets going.” A great example of this famous saying was shown this past Friday night as Cody Coughlin and his Team JEGS crew overcame a tough-handling car to finish 11th in the JEGS/CRA All-Stars Tour Night of Stars 100 at Lucas Oil Raceway in Clermont, Indiana.

“I feel like I drove great with a tough-handling race car on a tough track,” Coughlin said. “Our team did everything we could to get a solid finish and hold on to the points lead.”

To maintain his JEGS/CRA All-Stars Tour point lead, Coughlin had to fight a racecar plagued with a tight condition throughout the day at Lucas Oil.  His entire crew, which includes Team Manager Kevin Hamlin, Crew Chief Nick Easton, Chassis Consultant Freddie Query, Spotter Scott Wimmer and Crew Members Dave Holt, Jeremy Wilburt, and Tony Collier, didn’t give up on making many changes to the car for Coughlin to be competitive in the 100-lap race.

“We had an uphill battle all day, but I have to commend my crew for their hard work,” Coughlin said. “We will have days like this and a successful team is one who can overcome challenges, learn and get better for the next race.”

After starting 23rd, Coughlin was able to drive his JEGS Chevrolet to the 11th place finish on a track that is known to be tough to pass because of its unique racing line.

With the finish, Coughlin is ready to defend his point lead and pull away from the competition at the next JEGS/CRA All-Stars Tour event at Auto City Speedway in Clio, Michigan on Saturday, August 10.

“We weren’t the only ones to struggle at Lucas Oil Raceway on Friday night,” Coughlin said, “My toughest competition finished pretty close to me. This should be a fun battle with the upcoming events.”

While it wasn’t the kind of race Coughlin hoped for at Lucas Oil Raceway, he was still grateful to meet the fans and have the loving support of his family.

“I really appreciate the fans who come out to see us race at the different tracks we visit throughout the season,” Coughlin exclaimed. “It is humbling to know that we have fans of all ages.

“My parents, John and Di, along with my sister Kennedi give me a lot of moral support, especially when we are having a tough day on the track.

“I also have to thank God for keeping my spirits lifted high knowing the gifts he has bestowed upon me, my family and my crew. We are one big team and a successful team.”