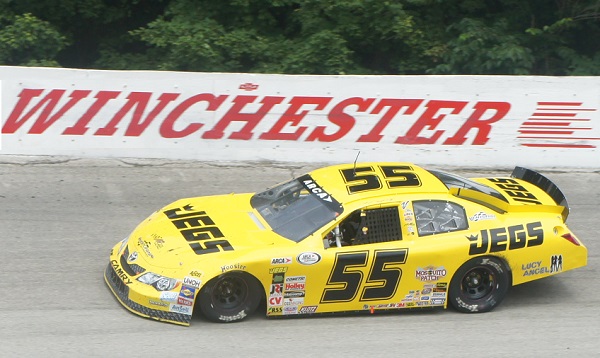 WINCHESTER, IN — On Sunday afternoon, 18-year-old Joe Gibbs Racing Development driver Cody Coughlin displayed an amount of toughness that many people would consider to be unmatched.  Despite battling a tight racecar during the 200-lap ARCA Racing Series event on the grueling high-banks of Winchester Speedway (IN), Coughlin rebounded from going one lap down during the middle stages of the race to finish seventh in the Herr’s Chase the Taste 200 on Sunday afternoon.

“It was a hard fought battle,” said Coughlin, the driver of the No. 55 JEGS.com Toyota for Venturini Motorsports.  “We didn’t really necessarily have the best car out there, but the whole team stuck with it to bring home a respectable finish.”

After starting from the 11th position, Coughlin battled within the top-10 for the entire race as he fought hard to put the team in a position where they could improve their finish during the later stages of the event.  A lap 192 caution would be exactly what Coughlin needed to carry out the team’s strategy.

Under caution, Coughlin visited pit road for right side tires and rejoined the field on the lead lap.  On the ensuing restart, the Delaware, Ohio driver powered to the outside of a number of lead lap cars to improve his position and cross the finish line in seventh.

“That’s what we needed and it happened,” said Coughlin of the late race caution.  “In racing you can’t necessarily just depend on raw performance.  You need strategy and some luck involved.  That was on our side more so than not today.”

His seventh-place finish on Sunday afternoon gives Coughlin his fourth ARCA Racing Series top-10 in six career starts.  Although he’d rather be in victory lane on race day, Coughlin looks at Sunday’s finish as a big step towards getting to where he’d like his team to be.

After 200 laps on “the world’s fastest half-mile asphalt oval”, Coughlin was thankful to the Lord and those that support him on race day, as well as throughout his racing journey.

“I have to thank God for keeping me safe and giving me the great opportunity to do what I love, which is  racing these stock cars,” said Coughlin.  “I receive a tremendous amount of support from my family and friends who give me encouragement.  Specifically, I can’t thank my mom (Di), dad (John), and sister (Kennedi) enough for their support.  I look forward to my next race at Chicago in two weeks.”

Coughlin’s next ARCA Racing Series start in the No. 55 JEGS.com Toyota for Venturini Motorsports will come at Chicagoland Speedway on Saturday, July 19.