Cody Coughlin Dominates in the Shadows of the “Circle City” 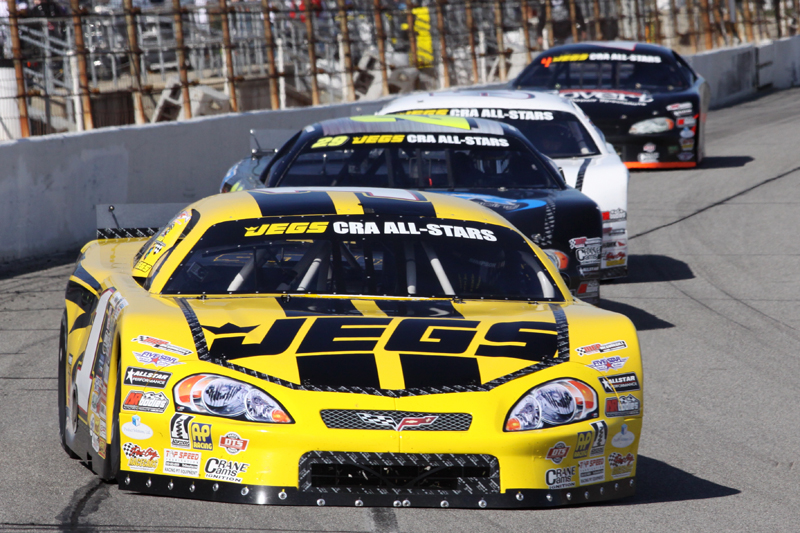 Racing fans at Lucas Oil Raceway, outside of Indianapolis, now know who Cody Coughlin is.  The 16 year-old dominated the Commonwealth Engineers 100 at the famed track on Sunday.  He led more than half of the event (56 laps) before the handling of his number-one car faded near the conclusion of the JEGS CRA All Stars Tour race.  The Ohio native netted a sixth place finish.

The dominant fashion of which Coughlin’s driving displayed also taught the teenager a valuable less after the 100-lap Pro Late Model race.

“I really learned a lot about how to change my line to save tires for the end of the race,” said Coughlin, who’s family has scored numerous wins and titles on the adjacent drag strip at Lucas Oil Raceway in NHRA action.  “I was running a line where I would kind of go in a little bit lower, let it drift up to the wall and cut it back down.  I think that was a little too hard on the right front tire, so I started going in a little bit higher and didn’t have to drift up as much or cut it down as much to save it.  It worked, but when (Daniel) Hemric got by me, I followed his line and he was running even higher than I was.  Now I know exactly what to do when we go back there and I think I can apply that same idea to a lot of tracks.”

Coughlin started Sunday’s main event on the outside of the front-row.  He quickly moved his JEGS Chevrolet to the lead on lap 11 and stayed there till lap 67 when series point leader Hemric moved by him.

“The race was a great stepping stone for us,” admitted Coughlin.  “We struggled a little bit in the middle of the year to get our program together and I think we made a lot of good gains.  That’s definitely the first time I’ve dominated like that in a race.  We had the best car the first 70 laps and then Hemric must have saved his stuff a little better than I did and just went by us.  That was disappointing because I could taste the victory coming and that was definitely the closest I’ve been to a win in a long time, but we will be much better for it as well.  Sunday was a good stepping-stone for our team.”

Coughlin and his team led by crew chief “Butch” VanDoorn, team manager Kevin Hamlin, driver coach Bubba Pollard and spotter Scott Wimmer will continue their 2012 season on the high-banked, half-mile Winchester Speedway in Indiana.  The Winchester 100 presented by JEGS will be held as part of the historic Winchester 400 weekend on Friday, October 12th.

“I think that we have some confidence on our side,” stated Coughlin.  “We have our stuff together with our whole program and the guys have been doing such a good job.  We made some good gains the last couple of races so we definitely have confidence and I think we can use that to our advantage going to my best track, Winchester.  With my team, family (dad, John, mom, Di & sister, Kennedi) and God on my side, I think we’re going to have a good shot at getting us a win by the end of the year.”