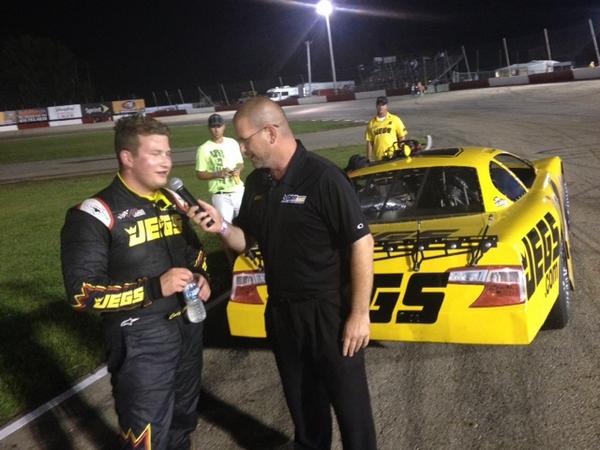 COLUMBUS, OH — Joe Gibbs Racing development driver Cody Coughlin had the attention of race fans in attendance at Columbus Motor Speedway (OH) on Saturday evening.  Coughlin, of nearby Delaware, Ohio, put on a show for his hometown fans as he charged through the field during the later stages of the ARCA/CRA Super Series JEGS Bud St. Amant 174 to record a strong second-place finish.

“We’ve always been kind of hot or cold here at Columbus, so it’s great to be able to get a good finish tonight,” said Coughlin.  “Bud St. Amant was a mentor to me and I love him like a grandfather.  It means a lot to me to be able to run good in Bud’s memorial race.

“I’m proud of our guys, too.  We had a solid run.  It’s our best run we’ve had with the CRA Super Series and it was at our home track.  There are a lot of positives to take away from this run tonight.”

After starting the race from the fourth position, Coughlin would drop a few positions early as he listened to the suggestions from his spotter, Scott Wimmer, to conserve tires.  He would eventually begin his charge back to the front nearing the halfway mark of the event and make his way to fourth at the lap 100 competition caution period.

At that point, it was game time for the 18-year-old racer.  Coughlin would work the outside on the ensuing restart to take away the third position and set his sights on the leaders.  With just over 50 laps remaining in the event, Coughlin was running faster lap times than the first and second-place cars while he erased a nearly half-straightaway advantage.

In front of his hometown fans, the Ohio native would make his way to the second-position with 15 laps remaining.  He held onto that spot in a side-by-side battle for the position as the No. 1 JEGS.com Super Late Model crossed under the checkered flag.

“I was driving pretty hard during those last 50 laps,” said Coughlin.  “It actually seemed like to go faster you actually had to go slower so I had to be careful about how hard I pushed it.  It made it difficult because I knew we had a great car under us and could run them down.”

Travis Braden, a good friend of Coughlin’s, would win the event driving for Gary St. Amant, the son of the great Bud St. Amant.

“Travis is a good friend of mine and I’m glad they had a great night.  “I was telling Travis and Gary before the race that it’d be cool if we could finish one-two and that’s what happened.  I’m very pleased with it.”

In addition to racing in honor of Bud St. Amant on Saturday night, Coughlin’s night was also special because of the amount of supporters that came out to support him in his home state.  Family, friends, and fans in Cody Coughlin t-shirts could be seen throughout the Columbus facility throughout the day.

“I can’t thank all of my fans enough for their support tonight,” said Coughlin.  “It’s an honor to be able to come back and race in my home state.  I couldn’t ask for a better group of people to have supporting me during my racing career.  My mom (Di), dad (John), and sister (Kennedi) were all here cheering me on tonight, as well as other family members and family friends in the grandstands.  It’s a great feeling to have a run like this in front of all of them.”

Cody Coughlin’s next scheduled event will be on Saturday, August 9 when he travels to Auto City Speedway in Clio, Michigan for the JEGS/CRA All-Stars Tour 100-lap event.