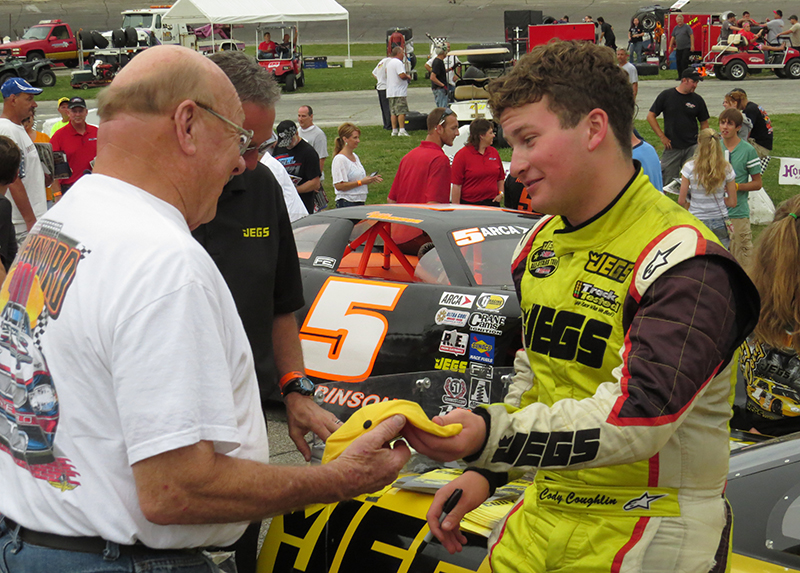 Cody Coughlin is pumped up and eager to get back behind the wheel as soon as he can. The 17-year-old is hoping to add another famous Coughlin name in the history books at Lucas Oil Raceway (LOR) in Clermont, IN this Friday night.

The Coughlin name is very well known at LOR, but more on the drag strip that is adjacent to the half-mile oval. In fact, his uncle Jeg Coughlin, Jr. put on a stellar performance back in 2000 when he won the U.S. Nationals as the 16th qualifier for the prestigious Labor Day weekend event.

Cody Coughlin is now hoping to etch the famous JEGS High Performance and the Coughlin name to the oval side of LOR as he will be racing in the JEGS/CRA Pro All-Stars Tour and ARCA/CRA Super Series powered by JEGS events at this Friday’s “Night of Stars.”

“We now have our sites on at Lucas Oil Raceway to not only gain the points back we lost this past weekend, but also to gain more as well,” Coughlin exclaimed. “We ran really well there last year and led a lot of laps until something happened and we fell out of the race. I think we can go and make a run for the checkered flag.”

The last time the JEGS/CRA All-Stars Tour competed at LOR, Coughlin led 55 of the 100 laps.

This past weekend, Cody competed in both the JEG/CRA All-Stars Tour 100 and the ARCA/CRA Super Series powered by JEGS Redbud 300 event at Anderson Speedway in Indiana.

He finished seventh in the 100-lap event on Friday night and 20th in the Redbud 300 after falling victim to an on-track incident.

“As a team, this was a very good weekend as we learned a lot and we all cannot wait to go racing again at O’Reilly Raceway Park this Friday,” Coughlin said. “We had a strong top-10 finish in the JEGS/CRA All-Stars Tour event this past Friday and we were stronger in our Super Late Model debut.”

Anderson Speedway in Anderson, Indiana is a tough high-banked, quarter-mile oval with a great short track history.  It is a tough place to pass yet it is exciting for fans and competitors.

Coughlin started sixth in the JEGS/CRA All-Stars Tour 100 on Friday night.  He was being patient and saving his car for the remaining laps.  After an incident at the halfway mark, Coughlin fought his way back to a seventh place finish.

“It was a track position kind of a race. We got bottled up at the start along with my car being tight,” Coughlin explained. “We couldn’t find a way to get back up closer to the front and challenge for the win. It was a decent night for us, we hoped to gain points in the standings, but we lost a few.”

On Saturday, Coughlin made his debut in the ARCA/CRA Super Series by qualifying 10th for the Redbud 300, his first event driving in a Super Late Model stock car.

Coughlin was being patient in the 300-lap event trying to take care of his car and tires so he could be around to challenge for the win at the end of the night.

On lap 68, his night would come to an end early as he tried to avoid a spinning car ahead of him and had nowhere to go but the outside wall in turns three and four. The JEGS Chevrolet suffered right front damage and was done for the night.

“This is a race where you need to take it easy in the early going.  Especially when racing with other competitors. There has to be some give and take,” Coughlin explained. “Two cars ahead of me were fighting for position to where one car spun and I went high to avoid the spinning car, but ran out of room.

“The car was awesome. Freddie Query and the crew had a great setup in the car and I feel we could have had a strong finish. My entire crew learned a lot from our setup in the JEGS/CRA All-Stars Tour race to where it came in very handy for the Redbud 300.  Easily we, as a team, had more positives than negatives this past weekend.”

Even with the hard contact with the wall, Coughlin was able to safely walk away.

“I really have to thank God for the safety equipment we have in our race cars,” Coughlin said. “It was a tough hit and I am grateful that I was able to walk away and can’t wait to race again this Friday.”

Along with his crew, Cody also was quick to thank his family, his parents John and Di and his sister Kennedi for their support this past weekend.

He also enjoyed meeting many fans, especially those who stopped by to get a complimentary JEGS hat that Cody signed for them.