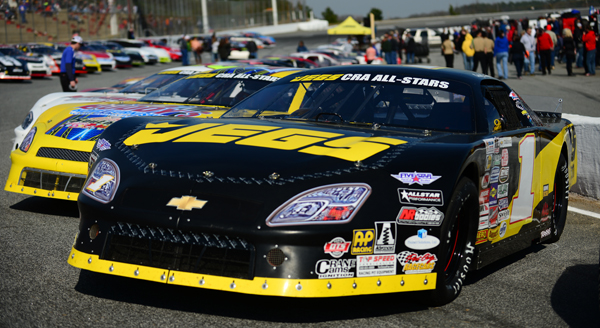 Cody Coughlin is ready for his return to Dixie Motor Speedway in Birch Run, Michigan this Friday night.  He is eager for a strong run and visit with some recognizable faces in the stands when he pilots his JEGS.com No. 1 Pro Late Model in the JEGS/CRA All-Stars Tour event there.

“I really like Dixie Motor Speedway, I have a good feel for the track,” Coughlin said. “We have had some good runs there in the past and I am very optimistic about this Friday night.”

Coughlin has competed in two previous JEGS/CRA All-Stars Tour events at Dixie Motor Speedway. He finished in the top five in 2011 at the 4/10-mile high-banked oval.

The 2011 JEGS/CRA All-Stars Tour Rookie of the Year is not only looking forward to competing at the track but also visiting the fans he gains every year when he goes back to compete.

“It is a lot of fun to visit with the fans, talk to them and sign autographs,” Coughlin exclaimed. “We have a nice mix of mom and pops who have come to the track all the time to younger fans who look up to me and hope to be behind the wheel of their own stock cars someday. I really enjoy the opportunity to meet with them.”

What is the most commonly asked question by the fans?

"I think the one question that I get asked a lot is why I chose to go in circles versus drag racing, which many fans who are also JEGS fans recognize,” Coughlin said. “I like to have fun with my answers by telling them that I like to be in the car a little longer or they also turn left, but at the end of their run.

“Overall, it is awesome to represent bring the JEGS brand in circle track racing.  God has blessed our entire family with many different talents and we each have a unique way of showing our talents.  Mine is shown more on the ovals.”

Coughlin is spending more time behind the wheel now that he has concluded his junior year of high school. Coughlin noted that his favorite subject is History.

They plan to get some testing at Dixie Motor Speedway this week prior to Friday’s event.