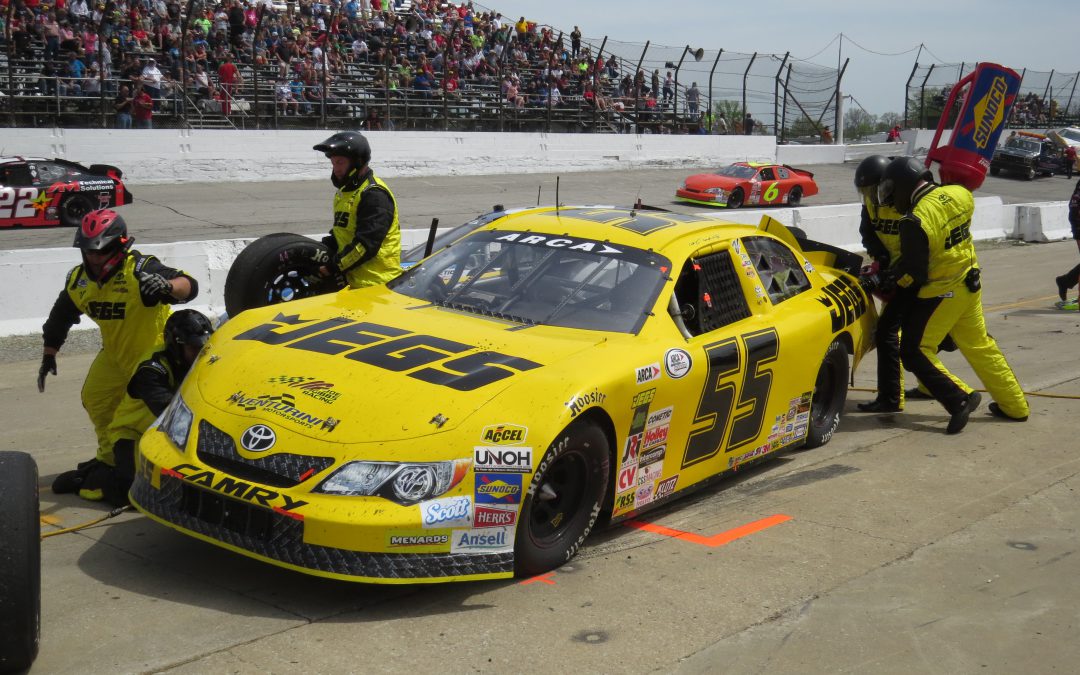 As Cody Coughlin makes the transition from Late Models to heavier stock cars there will many steps to climb to the top of the proverbial racing ladder.  After Sunday at Salem Speedway in Indiana, notch another rung in the ladder for the 18 year-old.  Coughlin has now scored a top-ten finish in ARCA Racing Series competition.

The Ohioan and his Team JEGS/Venturini Motorsports crew battled back from two laps down to finish a solid ninth in the ARCA Racing Series Federated Auto Parts 200 at Salem Speedway.  Not only was it his first top-ten finish in his second start, Coughlin was also the highest finisher within Venturini Motorsports stables.

The team fought a loose-handling car until a critical pitstop on lap 78.

The adjustments improved his number-55 car and by virtue of a couple lucky dogs, Coughlin was able to get back on the lead lap.  While battling for position at the high-bank, half-mile speedway, he would fall a lap down late in the race, but was able to hold on to his first top-ten finish in the ARCA Racing Series.

Overall, Coughlin was satisfied with how the team never gave up.

“I think we got a bad set of tires out of impound because it was really loose in qualifying and I couldn’t give it a half throttle in the first run.  It was tough to stay at speed with the others,” said the Joe Gibbs Racing development driver.  “We got a set of tires (during the pitstop) and that made a world of difference.  We were able get back on the lead lap, but we were  battling with a few guys and the leaders caught up to us and we finished one lap down.  Overall it was a solid day and a great learning experience.”

Bill Venturini, owner of Venturini Motorsports was pleased with how Coughlin and his team came back.

“I told this is a difficult place just to finish a race.  You can be one or two laps down like he was earlier and I told him not to worry about and he will be okay,” Venturini said.  “With ARCA’s new rules and the wave around, two laps down doesn’t mean anything and he proved it.  The kid did a good job.  He kept the fenders on it and he kept his cool.  We will go and get them next time.”

This race was the second of a handful ARCA events for Coughlin with Venturini Motorsports this year.

“The entire pit crew gave me great pit stops and made the right adjustments on the car,” Coughlin said.  “I really appreciate their hard work in preparing the car and their overall work this weekend.”

Coughlin also appreciates the support of John (father), Di (mother) and Kennedi (sister) for their support leading up today’s event.

“My family have been so supportive, it means a lot to me,” Coughlin said.  “I also praise God for a safe race today, I am very blessed to have this opportunity. and can’t wait for the next race to continue to make progress in the ARCA Racing Series.”

Coughlin’s next event in the ARCA Racing Series presented by Menards will be on Sunday, May 18th at Toledo Speedway in Toledo, Ohio.