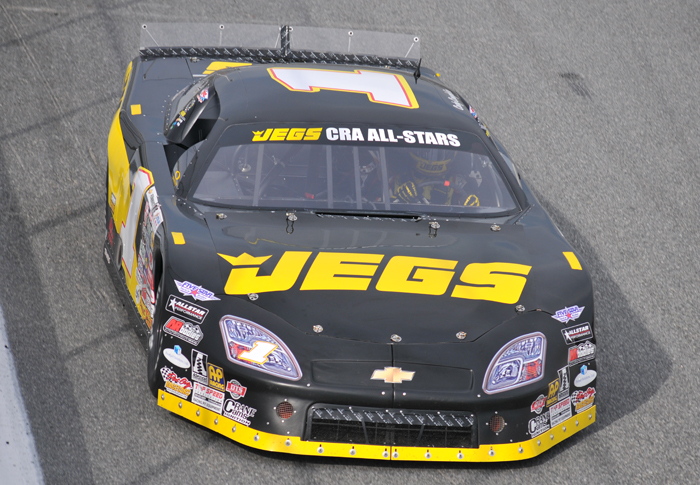 Promise, as defined in the dictionary is an “indication of future excellence or achievement.”  That definition captures the SpeedFest 2013 weekend for talented young racer Cody Coughlin and the new additions to Team JEGS.

The 17 year-old driver was near the top of the speed charts throughout the weekend at Watermelon Capital Speedway in Cordele, GA.  Led by racing veterans Freddie Query, Chad Wood and Scott Wimmer, Coughlin would find himself starting on the outside of the front row for the 100-lap CRA/JEGS All Stars Tour race.

Coughlin competed in the top-five during the first half of the Pro Late Model race to kickoff the 2013 season, but an honest mistake cost the team.  During the race weekend, the wrong tires were selected for the number-one JEGS racecar.  As a result, Cody hung in there and battled for an eighth place finish.

"We’ll take it because we fought hard all weekend,” said Coughlin, an Ohio native.  “Mistakes happen.  We are a team and we stick together; this will make us stronger.  Team JEGS really gelled this weekend and I see a lot of success headed our way.  Everyone on this team made a positive difference and with what I feel in our racecar, plus with God and my family behind me, we are going to have a strong year.”

Cody Coughlin will compete for the 2013 JEGS/CRA All-Stars Tour championship, but before that series kicks off at Illiana Speedway (IN) on April 7, there is plenty of racing to be done.  In fact, Coughlin and Team JEGS will compete during Florida Speedweeks in the month of February.  New Smyrna Speedway will be the site as Coughlin tackles some of the best racers in the business during the World Series of Asphalt Stock Car Racing at the fast, high-banked racetrack from February 15 – 23.