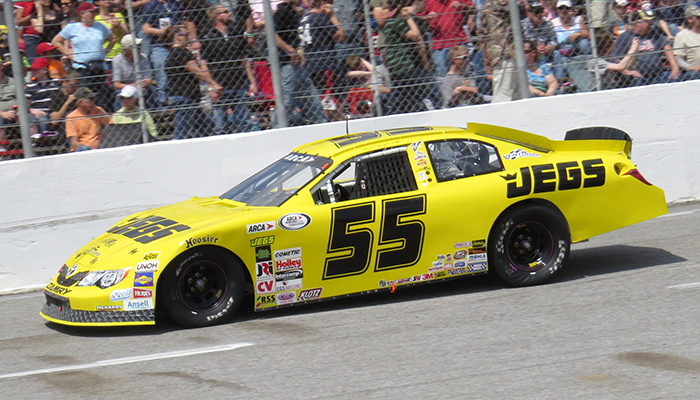 Everything that Cody Coughlin and his No. 55 JEGS.com Toyota team for Venturini Motorsports could control went flawlessly in the ARCA Mobile 200.  Had it not been for one unforeseen incident that Coughlin could not avoid, the end of the 18-year-old Joe Gibbs Racing Development Driver's day would have been just as strong as the beginning.

Coughlin raced inside the top-five, getting as high as third in the first 60 laps of his ARCA Racing Series presented by Menards debut at Alabama's Mobile International Speedway.  With the aid of near-perfect pit stops, Coughlin mixed it up with the leaders before being involved in an incident that started a few cars ahead of him in turn three.  Coughlin suffered right-front damage in the incident, but fought hard for the final half of the race to climb back into the top-15 and eventually 13th at the drop of the checkered flag.

While not as strong as the top-five run that Coughlin had going early on, the finish was still a strong one for the Ohio native's debut in the competitive ARCA ranks.

"We had a really fast car today," said Coughlin.  "It's so hard here because there's not a whole lot of room to avoid stuff.  There was a wreck up ahead of us and I just couldn't really avoid it.  I missed everything else today, but that one I just couldn't.  We ran in the top five and the top three today and I think we could've definitely contended for a top-five finish, but we had that wreck happen and just had to salvage the best finish we could."

Coughlin started the ARCA Mobile 200 in eighth position.  He radioed to crew chief Jeff McClure that he was happy with his car in the first run of the day at the high-banked half-mile Mobile oval.  He was in the sixth spot when the first caution flag flew, allowing him to come to the attention of his Venturini Motorsports crew.  The four-tire pit stop gained Coughlin three spots and he restarted third on lap 65.  For the rest of the race, even after the damage-causing incident and a solo spin later in the race, Coughlin kept his nose to the grindstone and continued picking up positions on the track.

"The crew did a great job all day long," added Coughlin.  "We all worked well together as a team, considering it was our first race together.  We were able to go out there and run up front and pass cars.  That says a lot about the potential that this team has.  Even after we got the damage, we were still out there passing some really fast cars.  They know we'll be there contending for wins in the next races that we do together."

The second half of the race, Coughlin steadily marched back up the standings, earning free passes and racing with lap times that rivaled the leaders'.  In addition to the highs and lows experienced in the 200-lap grind, Coughlin gained valuable knowledge about ARCA racing in his series debut.

"I learned a lot about how a car handles through the whole races today," said Coughlin.  "You can practice and test on old tires all you want, but until you can feel what your car goes through on a whole tire cycle in a race, there's a lot of learning that goes on.  I learned a lot about the art of passing in these ARCA cars.  They're actually a lot easier to pass with than the Late Models I had been driving the past few years.

"All in all, it was a good day for our JEGS No. 55 team.  The Lord blessed us with a good, safe race and we'll take everything we learned today into the next run.  I know that we'll be contending for wins soon."

Coughlin's next ARCA Racing Series presented by Menards start comes on Sunday, April 27 at Salem Speedway in Indiana.  In all, Coughlin will compete in 12 ARCA events with Venturini Motorsports under the supervision of Joe Gibbs Racing in 2014.