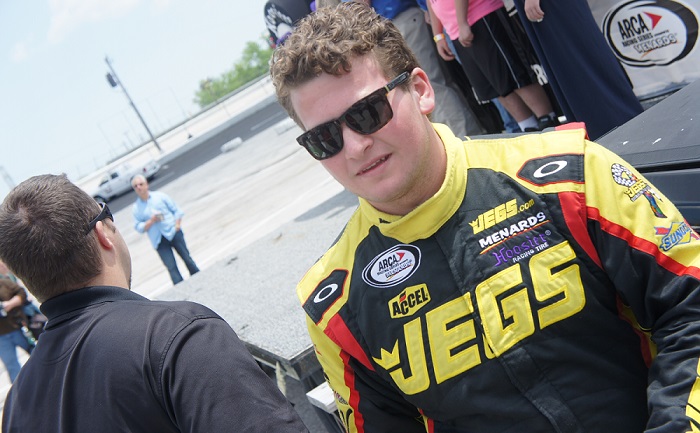 Never give up. That was the lesson learned by Joe Gibbs Racing development driver Cody Coughlin on Sunday afternoon at Toledo Speedway (OH).  Despite fighting the track position battle throughout the ARCA Racing Series Menards 200, Coughlin was able to hang tough and claim a career-best sixth-place finish in his No. 55 JEGS.com Toyota for Venturini Motorsports.

After starting Sunday’s race in the ninth position, Coughlin battled within the top-10 until the first caution flag flew on lap 51.  A brief mix-up on pit road dropped the 18 year old from Delaware, Ohio back to the 12th spot.  Coughlin was able to make up ground quickly on the ensuing restart to get back into the top-10 where he battled for most of the event.

During the closing stages of the race, Coughlin picked off a number of cars and was able to make his way to the sixth spot as the checkered flag waved.  Sunday’s finish was Coughlin’s second top-10 finish in three ARCA Racing Series starts.

“We were pretty fast there at the end,” said Coughlin.  “We just didn’t have any track position all day and that just kills you at a track like this.  When we got behind my teammate (race winner) Justin Boston and the 98 car (Mason Mitchell) we could run with them somewhat.   We could stay in the same zip code.  If we can just get some better track position, I think that will fix most of it.  We’re just going to work on a few things and go from there, but today was a very solid day overall.”

As Coughlin prepared to leave the half-mile Toledo Speedway oval to make the three-hour trip back to his hometown of Delaware, Ohio, he was able to take away a number of positives from Sunday’s race.

“There are a lot of positives to take away from today,” said Coughlin.  “Never giving up would be one of them.  There was a time I didn’t even think we’d be in the top-10.  The Venturini Motorsports crew gave me a great car that allowed me to stick with it and secure a great finish at the end of 200 laps.”

Another thing that Coughlin will be able to take away from Toledo, Ohio is the fact that he and his No. 55 JEGS.com Toyota team have shown consistent improvement in all three of his ARCA Racing Series events thus far.  After opening his season with a 13th-place finish at Mobile International Speedway (AL), Coughlin improved on that finish with a ninth-place finish at Salem Speedway (IN) and on Sunday he improved his finishing position once again by finishing sixth.

“It’s great to know that we are improving every time we go to a race track,” said Coughlin.  “I have received a great amount of support from Venturini Motorsports and Joe Gibbs Racing.  I also can’t go without thanking my family for all their support.  My mom (Di), dad (John), and sister (Kennedi) have always been there for me.

“I’d also like to thank God for keeping me safe and allowing me to do what I love to do.”

Coughlin’s next ARCA Racing Series presented by Menards race will be the Pocono ARCA 200 on Saturday, June 7 at Pocono Raceway (PA).