Cody Coughlin Focused on Winning in the Windy City 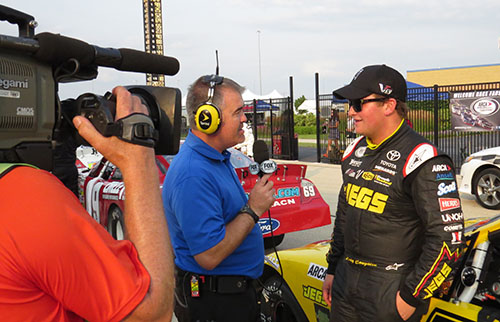 Cody Coughlin experienced a number of firsts at Chicagoland Speedway in 2014.  This weekend, when he returns there for the first time in almost a full year with his No. 55 JEGS.com Toyota Camry, he hopes to add another first – a first ARCA Racing Series victory – to his lists of Windy City firsts.

Now, almost a full year later, Coughlin will be eyeing a first victory when he straps into his Toyota this Saturday in the SCOTT 150.

"We definitely have a lot of confidence going into Chicagoland based on our notebook from our race there last year," said Coughlin.  "It was a great weekend for us, for sure.  We were working to find a good balance for our car on the 1.5-mile tracks.  We did that as the race went on and we've had some good runs on the speedways since then, so hopefully we'll pick up right where we left off and have a race-winning car."

Coughlin started fifth in last year's ARCA event at Chicagoland Speedway and remained inside the top-10 throughout the race.  A late pit stop allowed Coughlin the chance to charge back through and put himself in a position to chase the victory.  He worked his way back up to fifth at the fall of the checkered flag.

The fifth-place finish at Chicagoland began a stretch where Coughlin finished in the top 10 in six of his seven ARCA starts at the end of 2014 and into 2015.  Coughlin now hopes to start another strong run, not just strong finishes, but also victories for his JEGS.com team.

"We want to start a streak of wins now more than anything," added Coughlin.  "I know we are capable of wins and as long as we keep putting ourselves in good spots in the race, we should be able to do just that."

Coughlin will once again have the support of his entire family, but winning this race at Chicagoland will be even more special since it falls on Father's Day weekend.  John Coughlin, Cody's father, is at every one of his son's races along with Cody's mom (Di) and sister (Kennedi).  A strong showing on Father's Day weekend will be a true family celebration.

"I think it would be very special to celebrate our first ARCA win on Father's Day weekend," said Coughlin.  "Racing, a lot of times, is a father and son effort, but I'm blessed that not only do I have a dad that's very involved in my racing efforts, but my mom and sister are right there each race cheering me on.  They, plus my Team JEGS crew (Team Manager – Kevin Hamlin, Spotter Scott Wimmer and crewmember Dave Holt) and fans, really give me a boost every time we are at the track."

On-track activity for the SCOTT 150 kicks off at 4pm CDT on Friday, June 19 with a nearly two-hour practice session.  Qualifying will be held at 2:30pm CDT on Saturday, June 20, with the race taking the green flag at 6pm CDT Saturday.  The race will air live on FOX Sports 2.

Fans will be able to ride along with Coughlin during the SCOTT 150 through an in-car camera presented by JEGS.com on the live FOX Sports 2 broadcast.