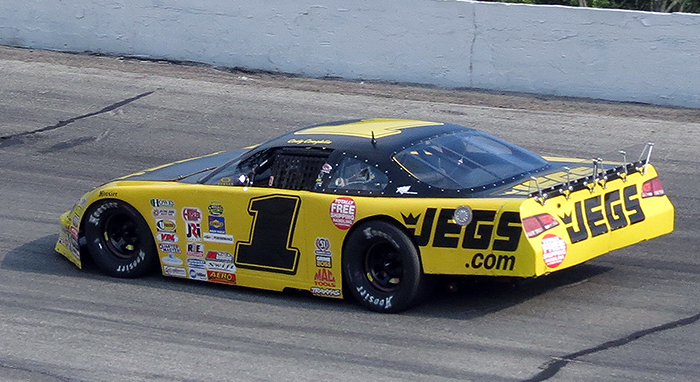 Cody Coughlin gave it everything he had this past Sunday as he tried multiple times to get the lead and pick up a big win at the famous Winchester Speedway in Winchester, Indiana.  Alas, the checkered flag flew with Coughlin in the second position with his JEGS.com No. 1 Late Model and gained valuable championship points with the effort.

With the second-place result at Winchester, Coughlin nearly doubled his point lead in the JEGS/CRA All-Stars Tour. Coughlin, who lists the high-banked half-mile of Winchester as one of his favorite tracks, wanted to get the win, but was well aware of his big-picture goals following the event.

He now has a 49-point lead with four events remaining on the 2013 JEGS/CRA All-Stars Tour schedule.

“The points are important, but at the same time we come to win and not just gain points,” Coughlin said after the race.  “We want to do both and not lose any points, but we come to win races.  It is disappointing to finish second again, but we also have two wins in the JEGS/CRA All-Stars Tour so that shows we can do it.  We are going to go to Owosso Speedway next week and give it all we got and see what happens.”

Coughlin started sixth in the 100-lap event.  On lap 39, Coughlin moved to second after a double-file restart. From there, the fans saw a great race as Coughlin was all over leader Trent Snyder, searching for a way to get by him.  Many times Coughlin would get a good run off the corners and get alongside Snyder to challenge for the lead.  With Snyder in the preferred high groove, Coughlin couldn’t get that space needed to complete a clean pass for the lead and would have to fall back to make another attempt.

“I knew if we got on the top side of the track and got a good restart we would gain some spots, which we did,” Coughlin said.  “I really have to thank Scott Wimmer for spotting for me and Bubba Pollard for driver coaching me tonight, they were a big help.”

“We are going to build on this and get stronger. The crew is really starting to click around and we are all motivated to do well,” Coughlin said. “We are putting together a real strong effort at each event. The rest of the season is going to be fun with them.”

“I want to thank God for a safe race tonight.  Winchester Speedway is a fast track where things happen real fast. There were some big wrecks tonight and I am glad that everyone was safe.”

Cody also enjoyed meeting with the fans at Winchester and is excited to see them again in October during the Winchester 400 weekend.

Along with the fans, Cody would like thank his family, especially his parents John & Di and his sister Kennedi for their positive and motivational support at each race event.

The Team JEGS crew will now get ready to head to Owosso Speedway in Ovid, Michigan this Saturday night.