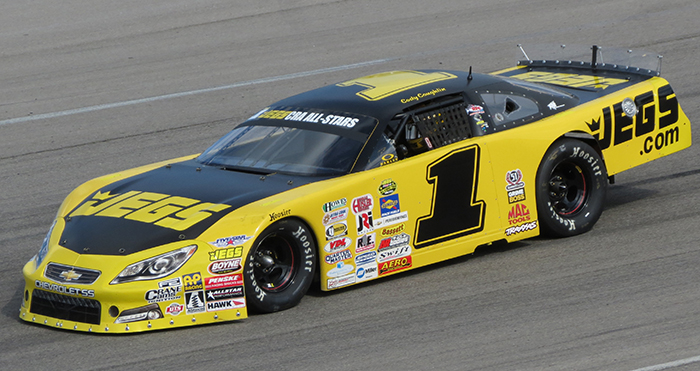 Last weekend Cody Coughlin and his Team JEGS crew were ready to go for another win in the JEGS/CRA All-Stars Tour at Owosso Speedway in Ovid, Michigan. But Mother Nature had another idea and the event was rained out.

As soon as the race officials made the decision, the team quickly focused on this Saturday night’s event at Springport Motor Speedway in Springport, MI.  This event was originally scheduled for April 28th but was also rained out.

Coughlin and his team tested there back in April and feel very confident going into this weekend.

“We were real good when we first when there back in April,” Coughlin said. “The car was real fast and we as a team think we will be again this Saturday night. After a week off, we are ready to go racing this weekend.”

He did note that Springport Motor Speedway might not be the same as it was back in April.

“I heard they put some stuff down in the upper groove to help give two good grooves of racing,” Coughlin said. “We will go there on Friday to test with the other teams to see what we as a team needs to do to help us get another victory.”

The Columbus, Ohio driver currently holds a 49-point lead in the JEGS/CRA All-Stars Tour standings with three races remaining in the 2013 schedule.

While the ultimate goal is winning the championship, Coughlin has his eyes on another personal goal.

“My personal goal this year is to get at least five wins,” Coughlin explained. “Overall, we have three wins. We won in February at New Smyrna and have two victories in the JEGS/CRA All-Stars Tour. We have three events in the Tour and some specials coming up that could help us achieve that goal. It would be great to get those wins in the Tour to help seal up the championship.”

Fans make sure to visit Cody during the pre-race autograph session this Saturday to pick up the new JEGS catalog and get an autograph from JEGS oval track specialist.

Not only does Cody appreciate the support from the fans, but from his family, his parents John & Di, and his sister Kennedi, who is his biggest cheerleader.

“The fans have been great to visit with this season and our whole team and family really appreciates the support,” Coughlin said. “I really have to thank God for the great season we are having so far and we hope to keep the momentum going this weekend."