Cody Coughlin Gets a Top-10 Finish in the Winchester 400 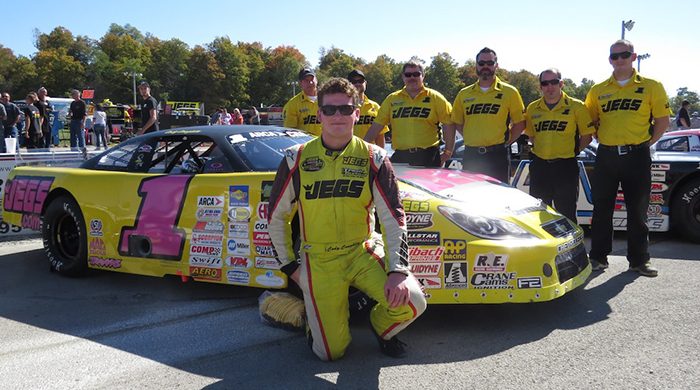 The Winchester 400 is one of the most demanding events in short track racing. Four-hundred laps around the fast high-banked, Indiana half-mile Winchester Speedway oval are demanding on the driver and equipment. This past Sunday, Cody Coughlin and his Team JEGS crew came prepared for the event and went home with a solid seventh place finish.

This was Coughlin’s first start in the 42nd Annual event and, so far, the longest event in his young career. The race itself requires a lot of concentration and attention to detail to not only survive, but also complete all 400 laps, which Coughlin did on Sunday.

After the race, he was extremely happy with his seventh-place finish.

“Absolutely, this was my third Super Late Model race, let alone the Winchester 400, and my goal today was just to finish all 400 laps.  I knew we would get a decent finish if we did that,” Coughlin said. “The guys did an awesome job all day, especially with this being my first race where I did live pit stops. Our car got tight near the end, but we were racing with some of the best in the world and to race with them was really cool.”

Coughlin had a simple strategy to finish the Winchester 400.

“I thought if we stayed out of the wrecks, we could be in contention for a good finish,” Coughlin explained. “The best part is we had to pass some cars to get a good finish, so that means a lot to be able to get a seventh place finish. I am definitely excited about where we finished.”

As noted earlier, Coughlin thanks his team for their hard work over the weekend.

“They worked their tail off. We had a bad night on Friday night (in the JEGS/CRA All-Stars Tour 100-lap feature) and they stayed positive throughout the weekend,” Coughlin said. “We came out here with a fast car and were in contention. That is all we can ask for from them. I am very proud of all of them.”

“Kevin and Nick put together a great setup and made awesome calls during the race.  Scott was not only an awesome spotter but was a great at coaching and encouraging me during the long race. I am very blessed to have them on the team.”

Earlier in the weekend, the team captured the 2013 JEGS/CRA All-Stars Tour Championship.

Before the race on Sunday, Cody Coughlin had an opportunity to meet with many fans during a pre-race autograph session. Many of the fans received an autograph card, JEGS decals, and the best thing to have on a sunny day, a JEGS hat.

“The fans were so awesome and I heard a lot of positive comments from them,” Coughlin said. “The variety of ages that stopped by was awesome. Thank you all for coming out and supporting short track racing.”

Cody also had many family and friends there to see him race last Sunday.

“I really have to thank my parents John & Di for their love and support and my sister Kennedi for cheering me on all weekend long. This was a memorable weekend for all of us.

“Also, Praise to God for his blessings he bestowed upon all of us, especially with the talents we each have to share as a team. I am very thankful that he kept all of us drivers and fans safe this past weekend.”

After racing around a half-mile oval for 400 laps, Coughlin felt good after the race.

“I feel real good and I am going to McDonalds.”