Cody Coughlin Has a Monster Run At Dover 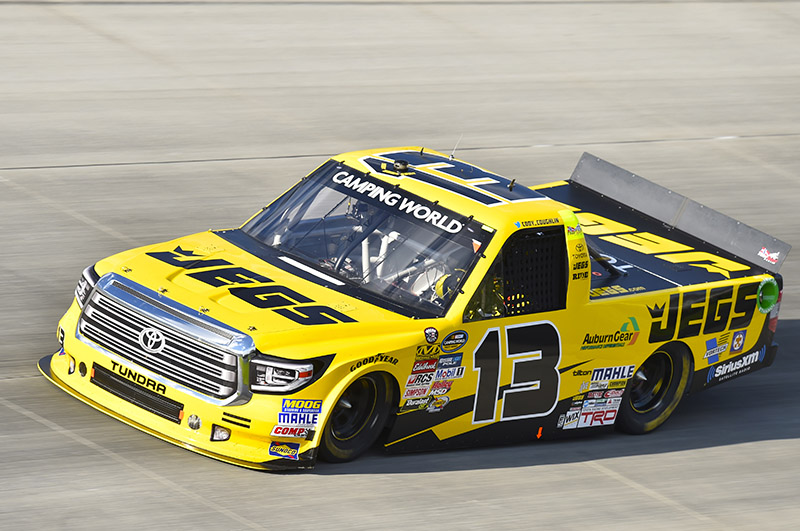 Miles the Monster tried his hardest to take down Cody Coughlin, but Coughlin valiantly fought back against the beast. After an early-race incident damaged Coughlin’s No. 13 JEGS.com/RIDE TV Toyota Tundra for ThorSport Racing, Coughlin rallied back to race inside the top five in the Bar Harbor 200 at Dover International Speedway (DE) for the NASCAR Camping World Truck Series.

Coughlin was involved in an incident on the backstretch midway through the 200-lap race’s first stage. He received damage to the left side of his race truck, but his crew did their best to make fixes quickly.  The 21-year-old driver lost one lap in the process, but he persevered to get his lap back by the end of the first stage.

The Delaware, Ohio native worked his way through the field and avoided a few crashes to work his way into the top five by the start of the race’s final stage.

Coughlin ran in the top five for a good amount of time before an incident on pit road put him three laps down. A stalled truck on pit road came to a stop right in Coughlin’s pit box as Coughlin tried to make his final pit stop of the race.

Coughlin finished 16th, three laps down, after starting 17th in his first start at the Monster Mile.

“It was an eventful 200 laps,” said Coughlin.  “Once again I feel like we didn’t get the result that we deserved, but we did a good job of fighting back from that early incident.  Michael (Shelton, crew chief) and the guys did a great job to get it fixed from the early incident. It was a lot of fun racing in the top five before that pit road issue on the last stop. It’s always fun racing with my ThorSport guys. I’m glad Duke and Rhonda Thorson let me pilot their trucks. We’ll head off to Texas next week and hopefully get into the top 10 there.”

Coughlin and his ThorSport Racing team will be back on track next Friday, June 9th at Texas Motor Speedway for the WinstarOnlineGaming.com 200.

For more information on Cody Coughlin and Team JEGS, visit codycoughlin.com and follow Cody on Twitter, @Cody_Coughlin.  Follow Team JEGS on Twitter, @TeamJEGS, and “Like”JEGS Performance on Facebook.  Follow ThorSport Racing on Twitter, @ThorSportRacing, and visit them online at ThorSport.com.  If you need more information regarding ThorSport please contact Jessica O'Brien via email at Jessica@edgehillmanagement.com.  Any other inquiries for Cody Coughlin can be sent to Bob Dillner via email at bd51sports@gmail.com.